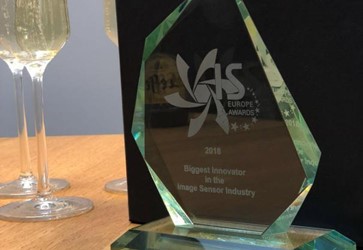 Leuven --- Xenics announces today that it has been named the winner of the “Biggest Innovator in the Image Sensor Industry” category in Image Sensors Europe Awards 2018. Hailed as the leading European event to drive forward the future of sensor applications, the award acknowledges the most outstanding achievements of companies and individuals. The winners were announced aboard the ERASMUS on a Thames river cruise as part of an evening drinks reception for the three-day conference.

As part of the 11th Image Sensors Europe conference, the Image Sensors Europe Awards aim to “create a platform for the industry to identify and reward companies and individuals who have demonstrated an unparalleled ability to succeed and to continually set standards of excellence”.

Open-ended entries were permitted for all nominations made. Xenics detailed the milestones achieved through the development of the XLIN-FC, its latest project in linescan SWIR detectors. Able to image at speeds several times higher than state-of-the-art while having excellent noise performance, the product best represents the company as an industry leader in SWIR innovation.

Two companies, including Xenics, were shortlisted as the finalists. The award ceremony concluded with the title “Biggest Innovator in the Image Sensor Industry” awarded to Xenics. The successful, unique combination of high speed and low noise in the InGaAs SWIR industry was cited as the primary influence in the panel’s decision.

Xenics is honoured to receive the award and thanks the judges for recognizing the achievements brought about by its latest product. The title - Biggest Innovator, stand as a testament to the company’s ongoing mission to be the leading provider of infrared cameras and detectors, achieved through continuous innovation driven by the market and its applications. “It (the award) proves that through the correct process, development focus and combination of efforts, we can earn the proper recognition in the industry.”, said Dr. Patrick Merken, Chief Operating Officer at Xenics. Patrick was present during the ceremony and represented Xenics in the acceptance of the award.