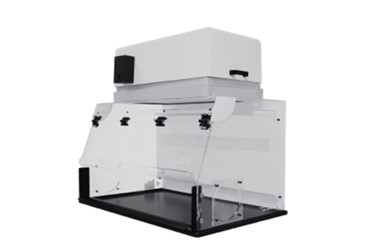 It is crucial in analytical environments that precise weighing takes place inside containment where potent powders being weighed do not escape into the lab.  This is typically accomplished with a top-mount safety containment system such as the one shown below.

An effectively designed unit must have an exhaust fan and HEPA filter located at the top of the unit, and such a fan has an inherent vibration.  If undamped, this vibration can significantly affect the accuracy and stability of the balance.

Any top-mount safety containment system must therefore accomplish two objectives which are at cross purposes: use air movement and a fan to accomplish protective containment while maintaining a vibration-free weighing zone to assure balance accuracy.

Flow Sciences incorporates a low vibration fan subassembly in its design by using a balanced fan, thicker low static pressure filters which put less strain on the motor, and a soft gasket junction between the fan subassembly and the containment unit.

The purpose of this paper is to measure the effectiveness of these three vibration isolation strategies.

Digital data was recorded in all three dimensions (amplitude vs. time) for all nine tests cited above.  All graphs have ~ 1 second sweep horizontally 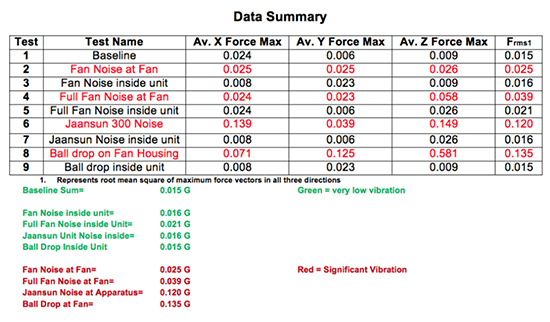 1. The ETA482424AAA weighing isolation device provides effective dampening from all vibrations investigated. The “full fan rpm” was the only instance where a slight increase from the baseline vibration value was noted inside the containment area.

We believe increased static pressure drop past our filter will increase fan “work” and subsequently vibration. With units that have a lesser fan or thinner filter would see this phenomenon appear to a much greater extent than the very slight vibration increase seen in this study.

2. The vibration dampening effect of our Weighing Containment Device is achieved using a series of sound insulating materials between the steel top-mounted fan housing and the containment superstructure and work top.

3. Room and fan impact vibrations are therefore effectively dampened even when the fan is not running because the material interfaces between the vibration sources and the balance inside the containment structure still exist. Both the table-mount Jaansun Capsule Machine and the ball drop had significant vibration as measured over the 1 second sampling time as measured on the machinery, but no effect whatsoever at the balance location.