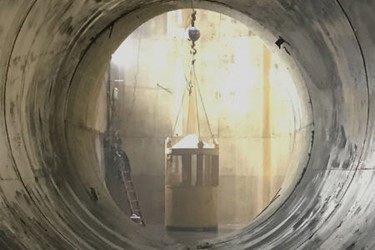 A Chicago stormwater diversion tunnel designed to correct a chronic flooding problem that has plagued the city’s Albany Park neighborhood over the past decade has been recognized for its effectiveness and ingenuity.

The Albany Park Tunnel project, which was completed earlier this year, was selected by The American Council of Engineering Companies (ACEC), Illinois chapter, for a 2019 Engineering Excellence Award. The tunnel earned an Honors Award in the water resources project category.

Projects receiving an Honors Award from ACEC-Illinois will now be considered for the Lincoln Grand Conceptor award, and are eligible for consideration for an ACEC national award, both of which will be named next year.

“It was a privilege to work with this team of professionals on the Albany Tunnel project, and this recognition from our peers is really special,” said Sonny Jaramilla, resident engineer who led the project for WSP USA.

Honor Awards recognize original and innovative projects for exceptional engineering that exceed the needs of the client, benefit the public welfare with economic and sustainable design considerations, demonstrate a high degree of merit, and add value to the engineering profession.

The Albany Park Stormwater Tunnel is providing relief for a Chicago community that has been decimated by regular flooding over the past decade.

Located about 150 feet below Foster Avenue on Chicago’s North Side, the 5,800-foot Albany Park Stormwater Diversion Tunnel was designed to carry stormwater from the north branch to the north channel of the Chicago River through a series of tunnels and shafts. The passive system uses gravity to carry the stormwater overflow away from Albany Park.

“The tunnel was designed to resolve the river flooding disasters for the Chicago Albany Park neighborhood,” Jaramilla said.

WSP served as construction manager for the project, working on behalf of the Chicago Department of Transportation (CDOT). Construction of the tunnel began in April 2016 and was put into operation in May 2018.

Plans for the $62.8 million tunnel were unveiled shortly after a second 100-year storm struck the area in a five-year span, bringing substantial flooding and property damage in the process. The first storm hit the region in 2008, followed with a similarly powerful storm in 2013.

The tunnel was mined by a 20-foot diameter TBM, comprising two hydraulic structures and shafts, with a mile of connecting tunnel through dolomite limestone beneath Foster Avenue.

The tunnel demonstrated its value very soon after it became operational. “In May and June, the tunnel was operated multiple times to reduce the risk of the Albany neighborhood flooding from significant weather events,” Jaramilla said. “The Albany Park neighborhood did not flood.”

Surface restorations and park openings, including a new baseball field, were completed in August 2018.

WSP served as construction manager for the project, working on behalf of the Chicago Department of Transportation. Construction began in 2016.

“The entire tunnel footprint spans three aldermanic wards involving thousands of residents,” Jaramilla said. “Public safety and awareness was paramount to the WSP team and essential for the delivery of a successful project.”

“The WSP team, with the support of CDOT, developed a comprehensive communication plan for construction. The plan empowered the construction team and community partners to proactively resolve potential impacts from construction operations and align efforts with the best interest of the community in order to achieve and maintain success at varying levels and perspectives,” Jaramilla said.

The communication plan was designed to make sure construction updates, potential disruptions, and other notifications were distributed in a timely manner to stakeholders, contractors, utility companies, a transit bus agency, multiple university campuses, a hospital adjacent to the construction, local businesses, and residents impacted by construction.

Jaramilla added that WSP performed close communication with representatives from a nearby hospital during controlled blasting operations to coordinate and eliminate schedule conflicts with sensitive medical equipment during blast rounds.

“These risks were identified through our team’s public awareness initiative and constant communication with the ward alderman and the hospital during construction start-up,” Jaramilla said.

He expects the successful communication plan to have an impact on future WSP projects as well.

“I intend on modeling our team communication plan for future projects to emulate its success with the adjacent public and continue to demonstrate our leadership skill set in the construction community,” Jaramilla said.

The public reaction has been one of satisfaction and relief.

“The tunnel is a success on multiple levels,” Jaramilla said. “It is operating as intended and it is assisting in the construction staging for some separate instream improvement projects currently underway downstream from the inlet.”

Chicago Mayor Rahm Emanuel — who visited the tunnel during construction in April 2017 and detonated a blast during his tour that was used to excavate the remaining rock near the bottom of the shaft — returned for the recent grand opening ceremony.

“A project of this magnitude takes teamwork,” Rahm said at the July 24 ceremony. “We are very pleased to work with our partners to deliver the 21st century infrastructure that the residents of this neighborhood need and deserve.”

Jaramilla was grateful to have the opportunity to work with the WSP team on a project that will make a big improvement on the quality of life for thousands of Chicago residents.

“The City of Chicago made a pledge to its residents to resolve the significant hardships of flooding in the Albany neighborhood,” Jaramilla said. “This eight-year project — from planning to completion — was made possible with trust and teamwork across multiple groups. The team effort required to overcome the challenges this project posed embodies the identity of Chicago.”

A comprehensive communication plan ensured that the construction team and community partners could proactively resolve potential impacts from construction operations and align efforts with the best interests of the community.