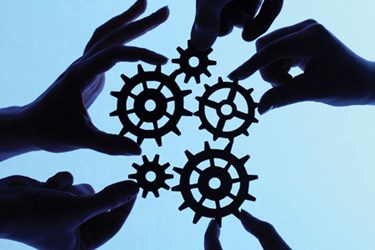 Hi-tech user-groups were all the rage 12 years ago, when Rosalind Collins started exploring how an electronic records management system by Laserfiche might ease records keeping in the Charlottesville, VA, Revenue Commissioner’s office. Today, that exploration has turned into an overhaul of operations and she credits a user-group for easing that transition, even as the self-help groups appear to be falling out of fashion in many other areas of hi-tech.

Collins’ user-group regularly attracts dozens to multiple meetings throughout the state, and then a hundred or more to a more centralized event held annually. As the technology has changed, so has the Virginia Users Group — and Collins credits this synergy with helping build rock-solid electronic records management foundations in government offices throughout the state. At the same time it allows some like-minded professionals to get out of the office, learn, and enjoy themselves.

“Finding others who love this technology as much as I do was really cool,” Collins says. “I didn’t feel like a freak, it’s was energizing.”

The interest in user groups came to Collins during a conference key-note presentation when Laserfiche’s founder, the late Nien-Ling Wacker, challenged attendees to bring the “light and excitement” of the event to their offices back home. A few months later, the first Charlottesville Laserfiche user group meeting included 12 users.

The following year, Collins was back at the annual conference, this time presenting on how to start a user group. In attendance was Amy Johnson, who was working on the installation of Laserfiche at the Office of the Commissioner of the Revenue in Hanover County, VA.

Inspired by Collins, Johnson started thinking about getting involved in a user group, but Charlottesville was 70 miles away. So, with a few introductions from UnityECM, a Poquoson, VA-based Laserfiche installation and consulting company, Johnson was on her way to creating her own users group.

“At the time we had just five or six people in the group and frankly we would run out of things to say,” Johnson said. “We thought maybe we could build membership if we started out as a touring user group and visit other Laserfiche devotees and discuss what they are doing with their system.”

Back in Charlottesville, Collins’ group was encountering growing pains of its own: the sagging economy had throttled government spending and Collins’s membership and meeting attendance was down. That’s when Collins and Johnson got talking.

“We got on the phone with other regional user group leaders working with Unity and said, ‘Let’s do a one-day, drive-in and drive-out event located in the middle of the state and make it free’” Johnson said. “Unity said: ‘That’s great, we’ll buy lunch.’”

It was 2009 when the Virginia Laserfiche User Group held its first statewide seminar with three goals: make it fun, free, and central for everyone. Today, the group includes government employees from more than 30 towns and nations and attracts nearly 120 people to its events.

In fact, last year the largest Laserfiche user group meeting in history was held with 122 attendees, five tracks, 22 sessions, and 13 new certified professional program graduates, according to Melissa Henley, Laserfiche’s director of marketing communications. “Leaders have come and gone and have changed jobs and retired but the Virginia user group is still going strong,” she said.

There are some challenges facing user groups today. Companies and government agencies are tightening their time, travel, and training budgets, but the group’s leaders say the benefits of talking high tech with colleagues using the same system in the same state far outweigh the costs.

So what continues to bring users back? Food and refreshments are a must and giveaways always generate excitement, according to Collins, but it’s a culmination of many factors that make them return.

For example, having face-to-face meetings instead of webinars is one way as it creates a community. Keeping meetings as high energy and engaging as possible with games such as BINGO and team activities on how to use Laserfiche at home is also a draw.

“When you feel like so much of your professional time has to be reserved and quiet, and then to be able to go to one of these to just relax and be open and come as you are and just learn, it’s a great feeling,” Johnson said.

For Angela Diggs, coordinator of records administration at Williamsburg James City County Public Schools, it is the atmosphere and professional connections she makes with other users who may provide a lifeline when she gets stuck that keeps her coming back.

“The user group is an extension of the training we receive from Laserfiche directly and it’s the real life experience for you when you get back to the office,” Diggs said. “The nuts and bolts of how we really use the system comes from others around the table just like me.”

Another draw for users is that they are not receiving sales pitches as meetings are created and presented by users. “Users want to see how other users like themselves are utilizing the system and once they have that knowledge the product sells itself,” Johnson said. “We’ve had great support from Unity because they never turned it into a sales opportunity — they were always hands off.”