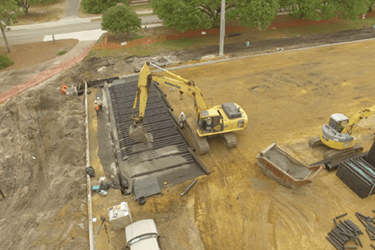 Jose Sartarelli grabbed a soccer ball and immediately showcased his dribbling skills. The University of North Carolina-Wilmington Chancellor even slammed a few kicks into the goal, demonstrating the athletic aptitude he developed as a boy in his native Brazil.

Sartarelli and the entire UNC-Wilmington community earned the right to celebrate at a ribbon cutting on the school’s campus. In August, the school wrapped up a $45 million facilities enhancement program that began even prior to Sartarelli’s arrival in 2015. The plan included $7.5 million to upgrade its athletic facilities, including the construction of four new athletic fields for intramural and club sports teams. Two of the fields were synthetic turf, and two required natural grass. The project included $500,000 allocated for stormwater improvements.

Besides the sheer scope of the project, construction teams faced several challenges from the outset. Due to the large site disturbance and strict drainage requirements of the new playing fields, substantial underground stormwater detention was required. Construction teams also encountered a high-water table in one of the applications, which necessitated the use of two different-sized chamber systems.

“The high-water table was a problem as it provided very little room for stormwater to infiltrate back into the ground,’’ according to Jon Shell, CULTEC’S Regional Sales Manager. “In addition, the detention systems needed to able to withstand light to moderate traffic loads up to 8,000 pounds per axle.”

The sports fields where CULTEC stormwater management systems were installed were not adjacent to one another, so the project required two distinct systems. The first system required 414 CULTEC Contactor Field Drain C-4HD stormwater chambers, which stand just 8.5 inches tall and are the lowest profile chamber on the market. They were covered by six inches of No. 57 stone, two inches of No. 8 stone and 1.75 inches of artificial turf. The total storage area was slightly less than 16,300 ft2 and provides a storage capacity of 11, 243 ft3 in a horizon of only 18.5 inches from bottom elevation to final grade.

The second CULTEC system featured 396 Contactor 100HD chambers installed in a bed configuration. Like the first system, the 12.5-inch-high chambers were covered with six inches of No. 57 stone, two inches of No. 8 stone and 1.75 inches of artificial turf for an overall depth of 22.25 inches. The system provides 10,225 ft3 of water storage, within an area of 11,189 ft2.

Site Contractor Joby Hawn of East Coast Contracting said it was essential to stockpile the pallets of CULTEC chambers to make best use of the available space at the job site and optimize material handling. “I wanted to keep it out of the way, which was important because this was a pretty tight job site,’’ Hawn said. “We were able to install about 50 chambers per hour with only two installers.”

The low-profile stormwater systems were completed in April 2017, and the final construction of the fields occurred over summer, while students were off campus. When they returned in August, the fields were complete with pre-drawn lines for sports such as intramural football and soccer, and a nearby building was constructed to store sports equipment and provide security measures. The new building also includes rest rooms to accommodate players and spectators. Thanks to the new stormwater management system, the fields will be playable even if there are weather-related issues. In the past, games would be canceled due to rain because of safety and flooding concerns.

The enthusiasm for the new fields extends from Sartarelli on down to the students. “My whole team was beyond excited about these new fields,’’ student Katie Solinski said to the school’s newspaper, The Seahawk. “(Field) hockey can now be played on grass or turf, but it’s a whole different level of play on a turf field. Before we had schools like Duke to play on a turf field, but now we have one in our own backyard.”

Situated near the shoreline, UNC Wilmington can see its share of stormwater challenges. Now, with a system in place for stormwater management, the students — and yes, administration — can be sure to enjoy their new recreational facilities for many years to come.

For additional information about CULTEC stormwater management chambers and other products, please call (203) 775-4416 or visit www.cultec.com.