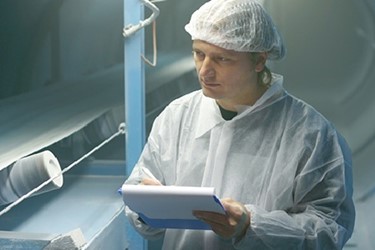 Airflow visualization testing, conducted as part of a routine review program, can help assure that aseptic filling areas remain under a state of proper control.

In fact, ISO standards recommend frequent airflow measurements. ISO standard 14644-2 requires “specifications for testing and monitoring to prove continued compliance with ISO 14644-1,” i.e., periodic measurements of airflow (1). The recommended tests to prove continued compliance include particle concentration testing, air volume or velocity and air differential pressure. Other recommendations suggest a maximum time interval of 24 months (1–3). This time interval may be extended based on the installation of instrumentation for continuous monitoring or other environmental control schemes based on a risk-based approach and area-specific data.

One process for conducting periodic airflow visualization testing is the tracer injection method, commonly referred to as the “smoke study.” An aseptic facility used this method for a routine airflow visualization program to provide assurance of unidirectional airflow in a critical part of the filling area.

After visualizing the area of horizontal airflow in front of the lyophilizer, an investigation was conducted into potential causes. The investigators reviewed maintenance activities that occurred on the equipment, integrity of the HEPA filters, airflow velocity testing 6 inches from filter face, filter life and room pressure at the time of testing. The investigation found none of these contributed to the airflow anomaly.

The filters were then returned to the vendor to perform pressure drop testing at rated airflow and velocity uniformity testing. The pressure drop testing did not identify an issue with the filter. Face velocity uniformity testing was performed using a TSI Anemosonic™ UA6 Ultrasonic Anemometer instrument to record velocity readings at 18 points on each filter (approximately 10 inches from the face of the filter).

Velocity uniformity testing showed a decrease in measured velocity from one side of the filter to the other. The decrease was approximately 30% on Filter 1 and approximately 50% on Filter 2. This is likely the result of uneven air supply to the filter inlet resulting in more particles loading on one side of the filter. This data suggests there are limitations to substituting air velocity measurements for periodic airflow visualization testing, necessitating further in-process monitoring.

Additional in-process monitoring may include differential pressure measurement or measurements of work surface velocities to help identify potential issues. The differential pressure across the filter membrane could be measured periodically and trended to indicate filter loading and potential flow issues. The differential pressure, however, can only be performed where the filters are installed with individual air supply to accurately measure the pressure across the single filter instead of the plenum to the room. The measurement of airflow velocities near the work surface/lyophilizer loading height could be measured and trended. Airflow velocity readings near the work surface, however, have inherent issues with repeatability.

Airflow pattern studies are an important component in the periodic review and recertification of aseptic processing areas.

Airflow measurements should be taken periodically in an area sufficiently below the filter face as to observe differences in actual supply velocities and also high enough above the work surface as to remain within “first air” that has not been influenced by the equipment in the working plane.

Alternatively, proper design on supply air filtration and in-process controls for airflow monitoring can be used to prevent issues that have an impact of air flow visualizations. These design methods may include prefiltration of supply air to reduce the amount of particulate loading on the terminal HEPA filter. In-process monitoring of the differential pressure across a terminal HEPA filter or air velocity measurements and trending of air velocity in the work surface area instead of only at the filter face may be used for trending purposes and identification of an issue that may impact airflow. Implementing these methods can be used to provide assurance of unidirectional air flow in the critical zone during routine use of the area and proactively prevent failures.

Note: This article originally appeared in the PDA Letter, a publication produced by the Parenteral Drug Association.  February 26, 2018

Tony Pavell has over 20 years of compliance experience primarily focused in production and technical services.