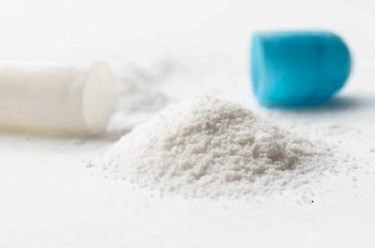 Traditional methods use quick and easy techniques like Flodex Cup and/or Angle of Repose measurements. Flodex Cup is a go/no-go type of test. Powder fills the cup and the test determines whether powder can flow thru an opening of fixed diameter in the bottom. Users of this method exercise judgement from experience to correlate the result with what may happen in their process. Angle of repose evaluates how steep the powder can stack up in a free-standing pile. The steeper the angle, the less likely the power will flow in the process. Both methods give a “yes” or “no” answer on whether powder will flow successfully during processing. The limitation is that degree of ease or difficulty in flow behavior is not qualified.

Tap test is another popular technique. Powder is placed into a cylinder and shaken up and down multiple times. Decrease in fill level of powder in the column is measured. Density of the compacted powder is calculated relative to the initial loose-fill density to give a compaction ratio. The higher this number, the more likely there will be flow problems in the process.

Shear cell shown in Figure 1 has seen increased use in recent years as a scientific method for qualifying absolute flow behavior. Industrial standards interpret shear cell data to give a clear picture of anticipated flow behavior that ranges from “free flowing” to “non-flowing” as shown in Figure 2. The significance of this method is that it simulates what happens to powder placed in a bin prior to start-up of processing. Settling occurs naturally as powder particles move closer to one another under their own self-weight. The shearing action when lid and cell rotate relative to each other measures the interparticle friction that must be overcome to allow relative movement. This yield stress value is known as the “unconfined failure strength” of the powder.

When powder processing first starts up on the manufacturing floor, the shear cell definitively predicts whether flow will occur and where on the scale from “free-flowing to non-flowing” the behavior is likely to be. As processing continues and fill level of powder in the discharge bin reduces, prediction for flow behavior in Figure 2 shows possible transition from “cohesive” to “very cohesive”. The reason is that powder remaining in the bin has been subject to consolidating forces that may have increased the powder strength (like compressing a snowball). When it comes time for that powder to slide down into the hopper, it may simply hang up and not move. This leads to stoppages in processing and may require temporary shutdown if the problem is not fixed right away.

It’s important to understand the significance of “annular design” for the shear cell because shearing force on powder in the “ring” is relatively uniform. This has distinct advantage over shear cells that are cylindrical in design where the shearing force is highly variable going from zero at center to maximum value at circumference. 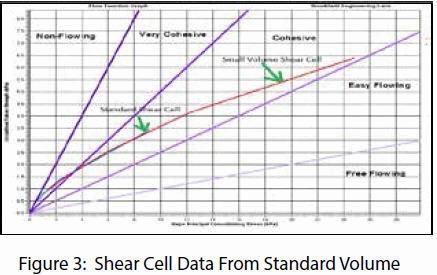 When running tests with Small Volume Shear Cell, the compressive forces applied by the lid on the powder sample are therefor a factor of 4 times higher. This is due to the smaller surface area of powder sample being exposed to the same absolute compressive force by the instrument. Fortunately, test data from both shear cells have good alignment in terms of continuity of flow behavior as shown in Figure 3. This means that the shearing action on powder particles in both cells is uniformly consistent.

Pharma companies that have transitioned to use of shear cell testing have a higher level of confidence in ability to predict flow behavior in gravity discharge from bins through converging hoppers. Addition of flow aids, when necessary, is more accurately evaluated for impact on flow behavior by shear cell measurements. Bottom line is that traditional test methods were not effective in predicting flow because they did not simulate forces acting on powder particles during processing. Authors: Robert