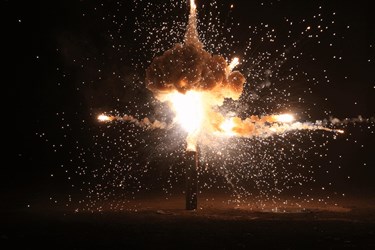 Whether explosives are being used to clear land for construction and digging deeper mines, or are being encountered by the military and police, it is important to understand how various chemical mixtures and detonators affect the power of an explosion. High-speed imaging can be used to quantitatively capture explosions, the resulting damage, and to measure other important parameters of the explosion. The data collected can provide information to aid in the understanding and characterization of a detonation, which can then lead to the creation of better and more precise explosives.

THE POWER OF HIGH-SPEED IMAGING

Explosions were historically analyzed by manually observing the scene before an explosion and then looking at the resulting debris field. Advanced imaging techniques, such as shadowgraphy or Schlieren imaging can be combined with high-speed imaging technology to provide relevant measurements including the fast, radial expansion of the shock wave and the velocity of fragments eminating from the explosion.

Explosions are thermochemical reactions that produce extremely bright light and often cause large, high-velocity, and vision-obscuring debris fields. Since a shockwave moves from 400 to 600 meters per second, the imaging area needs to be large enough to capture those changes — an area of around 50 X 50 centimeters is typically required. It is also important that the highest resolution possible be used to ensure high-quality data for post-processing of the images. If the camera is going to be placed close to the explosion, choosing a camera that is rugged will offer protection from the strong explosion shockwaves and the powerful air movements that follow the shockwaves.

The Advanced Explosives Processing Research Group (AXPRO) at the Colorado School of Mines used high-speed imaging to study fluid-desensitized detonators used in oil and gas applications, more specifically for well perforation. These detonators contain holes that cause them to deactivate in the presence of any liquid, offering an additional precaution against liquid that might enter the perforating gun.1 Erika Nieczkoski, an undergraduate researcher at AXPRO, sought to determine if a desensitized detonator, that is commonly used by the petroleum industry, functioned correctly when exposed to the liquids used for cleaning the perforating equipment, specifically water, mineral spirits, and petroleum diesel. The findings of this study were adopted by the oil and gas industry for a standardized operating procedure for the assembly of perforation charges.

The experiment required observations during denotation to understand the stages and interactions of the fluids with the detonators. The researchers used a high-speed camera to capture the activation of the detonator. This imaging allowed them to observe whether or not a detonation occurred. If one did occur then a determination was made on whether it was a full or partial event. The researchers used a Phantom v711 camera operating at 59,027 frames per second (fps). The explosions were imaged directly, without use of shadowgraphy or other imaging techniques. Figures 1 and 2 show the experiment set-up. Videos 1 and 2 below show some of the experiment results. 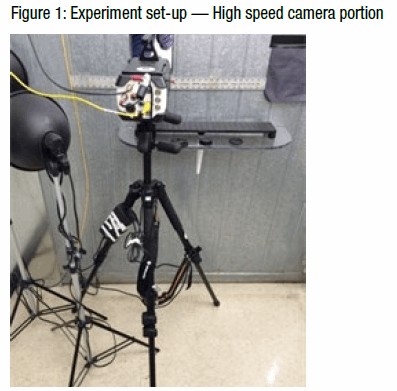 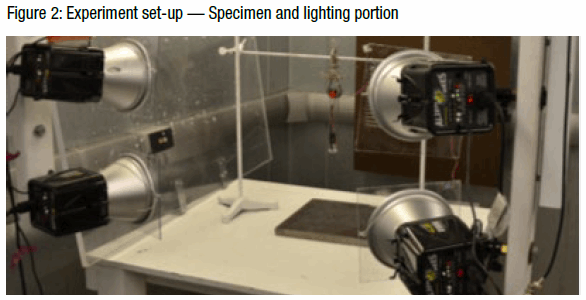 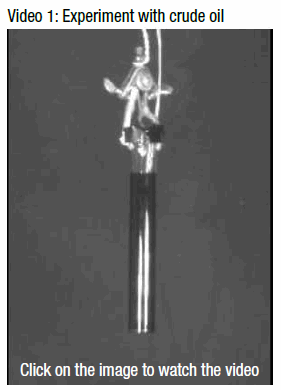 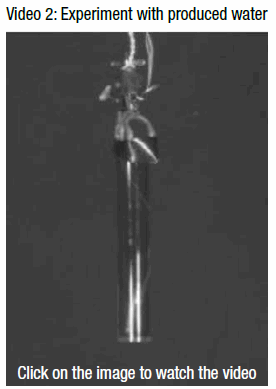 High-speed imaging identified whether a full or partial explosion occurred, and also enabled the visualization and characterization of the full detonation process, providing visual evidence as well as quantitative information on the precise processes taking place inside the detonator and during the explosion. The researchers could see which conditions were causing the desensitization to fail, and concluded that the cleaning fluids, diesel, and mineral spirits, did indeed affect detonator performance, causing the detonator to become desensitized when applied directly to the secondary explosives. Additionally, it was observed that the detonators do not become desensitized when fully submerged in fresh water up to 200 cm. Figure 3 shows images from the one of the experiments testing result with water. 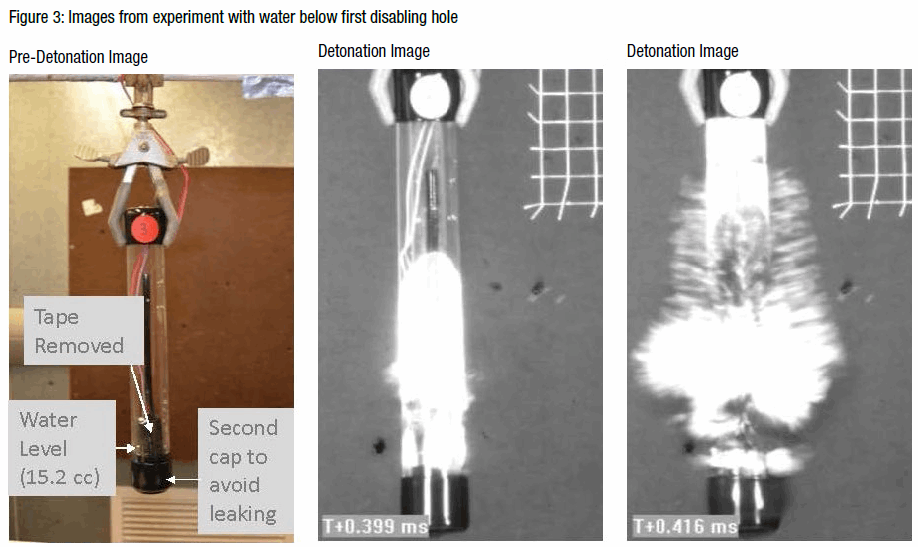 The Institute of Makers of Explosives (IME) requested that AXPRO researchers develop an optical method for measuring the strength of industry detonators. AXPRO combined high-speed imaging and shadowgraphy to create a repeatable procedure that could be used to accurately characterize detonator strength and performance.2 Traditionally, detonator strength has been characterized using indirect measurement techniques, such as detonating an initiation system into sand, next to a metal nail, or next to a metal witness plate and analyzing the result. However, these methods can be imprecise and time-consuming. An established standard analysis approach would help ensure that detonators designated with a specific strength actually are the same strength, regardless of manufacture location, and could be used as the United Nation’s standard of characterization testing. A standard testing approach could also help law enforcement agencies compare the strengths of homemade detonators with industry standards.

The new approach, created by AXPRO, combines (1) digital image correlation (DIC), an optical measurement technique that offers full-field quantitative analysis of displacement, with (2) shadowgraphy, a specialized visualization technique that images the shadow that is created when the shockwave interacts with light. The approach consists of detonating explosives in a room void of all possible light, capturing the reaction with a high-speed camera through shadowgraphy, and processing the measurement calculations through DIC software. The results are calibrated with pressure gauges, which directly measure the shockwave pressure during the event. The method provides measurements that directly represent the energy output of the detonator in a way that is relatively low cost, exhibits high data accuracy, and reduces data analysis time compared to previously used techniques.

To perform shadowgraphy, a Phantom v711 high-speed camera with a frame-rate of 9,100 fps and a resolution of 608 X 600 pixels was used, as well as a single AlienBees Flash Unit B1600 light source, a 5 millimeter rod mirror, and a retro-reflective screen. Figure 4 shows the birds-eye view of the shadowgraph experimental set-up. Capturing extremely fast phenomena, like explosives, requires the use of a short exposure time and large (f/4.5) lens aperture. Explosives generate bright light that can saturate images, however this typically affects only the initial few frames. To mitigate this, the researchers made use of the camera’s extreme dynamic range (EDR) mode. The ‘EDR’ function permits the end-user to expose for darker areas in the subject and then specify a separate and independent pixel level EDR exposure for the portions of the image that might become saturated, thus preserving the data in areas of the image prone to overexposure. 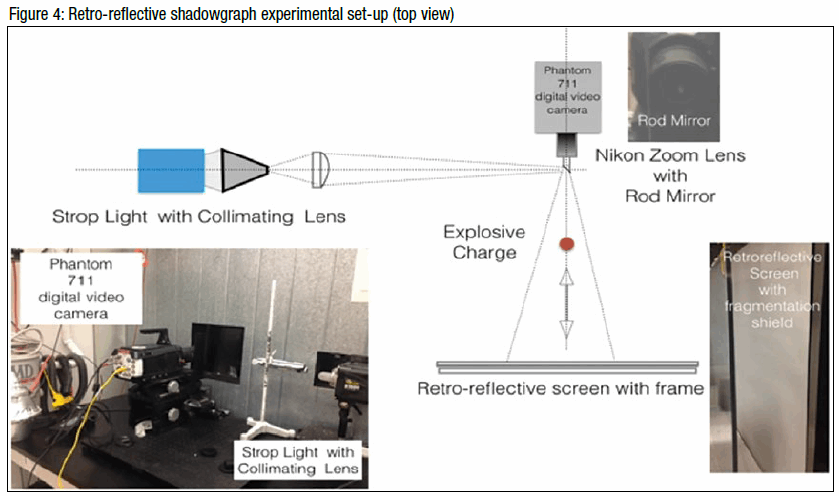 Although Schlieren techniques, which are related to shadowgraphy, were also considered, the researchers found that the mirrors required for Schlieren imaging not only limited the analysis area but also increased the cost of the necessary equipment. With shadowgraphy, they could cast a shadow onto a relatively inexpensive, large, retro-reflective screen without special mirrors. This allowed images to be taken from a 40- or 50-centimeter-squared area. These screens can also be easily repaired or replaced if damaged by debris. The AlienBees B1600 flash unit commonly used for still photography provided suitable illumination of long enough duration for this testing.

To calculate the measurements using DIC, the researchers used ImageJ software to track the position of the shock wave in consecutive frames. ImageJ is a public domain, Java-based image processing program developed at the National Institutes of Health. An image of the shock wave’s radial expansion was acquired and used to measure the velocity of fragments. Capturing the highest-quality data and images with DIC required determining the scale with minimum error as well as careful alignment of the camera with the imaging target. Also, because the researchers were measuring expanding shock waves, it was important to correct for non-parallel light. Figures 5, 6, and 7 show images of the detonations and the approximated blast wave generated with ImageJ software. 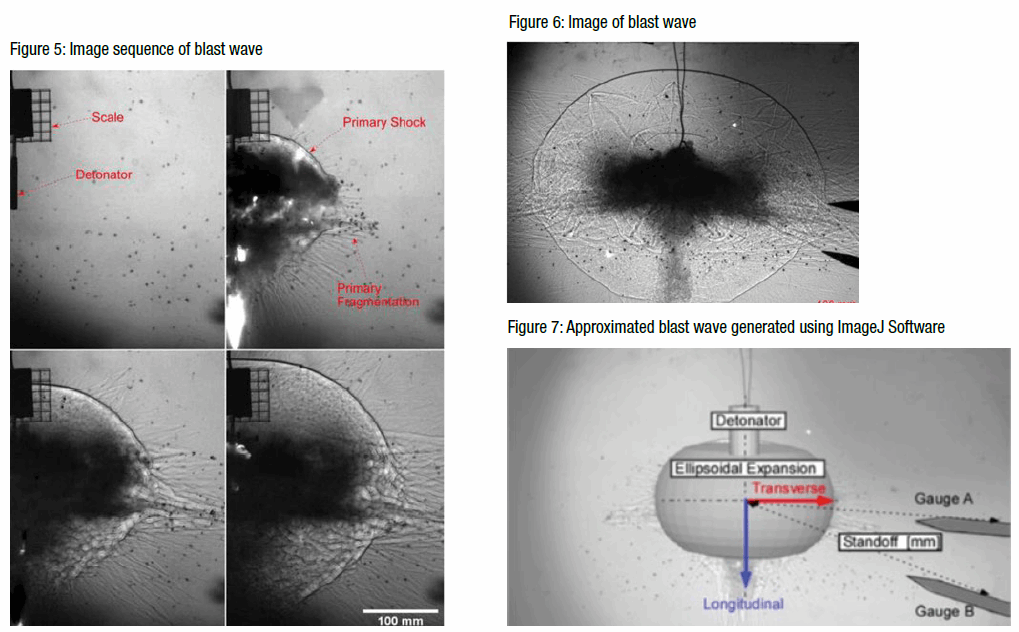 AXPRO researchers have tested their new technique by generating images of the initial blast wave of #6 and #8 strength electric detonators and electric bridgewire detonators. The clear and precise images acquired with the technique allowed them to characterize the blast performance with high accuracy. They were then able to use the images and data acquired to calculate the Mach number versus distance, which allowed them to obtain a single yielding coefficient that relates to the mass casing surrounding the explosive charge. They also used the momentum absorbed by the detonator shell to calculate the total explosive energy of the detonator.

Proper illumination is important when imaging explosives. Because of the brightness of the explosion, additional lighting is not always needed for imaging. In fact, a more important consideration may be limiting the light emitted by the explosion. A neutral-density filter can be helpful because it reduces the intensity of all wavelengths of light equally, which allows the use of combinations of lens aperture, exposure time, and sensor sensitivity that would otherwise produce overexposed pictures. Using the minimum aperture, short exposure times, and a camera’s EDR mode, can also be useful for reducing light. Figures 8, 9, and 10 show the impact of reduced exposure time and EDR mode in capturing a bright image. 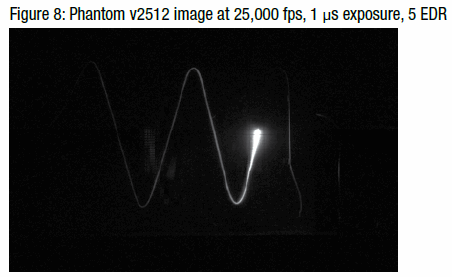 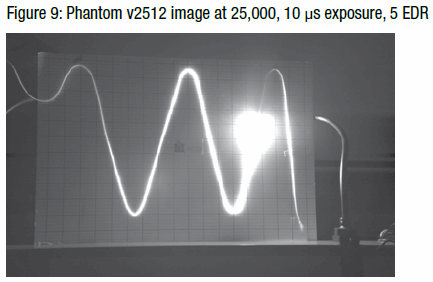 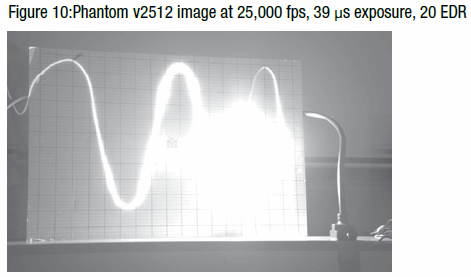 Explosion-rated LEDs can be used for illumination if an image of an object or area is needed prior to an explosion. When lighting the object, it is important that the illuminating light source and the light coming from the explosion both stay within the dynamic range of the camera. This can be very difficult because of the limited methods available for estimating how much light will come from the explosion. A good rule of thumb is to start with enough illumination for 1 microsecond or less, then if that is too bright, the aperture setting can be adjusted or a neutral-density filter added.

If an object needs to be viewed during detonation, a laser and a notch filter can be utilized to see through the fireball. When used in conjunction, the laser illuminates the object with high-brightness, narrow-bandwidth light, while the notch filter passes only the laser light and rejects the broadband light emitted by the explosion. This allows the camera to record details of the explosion that would otherwise be obscured by the bright fireball. Cavitar Ltd. offers diode lasers that can provide the high repetition rates at short exposures needed for imaging explosions. The near-infrared wavelength of the laser aids in imaging through the smoke at speeds over 100,000 fps.

Argon candles — hollow vessels filled with argon gas — can also be used as a high-intensity light source for imaging with a short exposure time. An explosive charge drives a shockwave through the argon gas to create a very intense short burst of light. Adding mirrors to the setup can direct the light in a way that avoids the creation of shadows. This technique is seldom used because of complicated setup, and because electric light sources are easily obtained (for example, the MegaSun illumination system can replace argon candles for high-speed imaging photography).

In conclusion, the high-quality data obtained with high-speed imaging combined with the right imaging approach and lighting setup can help scientists study explosives and their detonation systems in ways not previously possible.

Vision Research designs and manufactures digital high-speed cameras that can be used for imaging and analyzing high-speed explosions. Vision Research is a business unit of the Materials Analysis Division of AMETEK Inc.