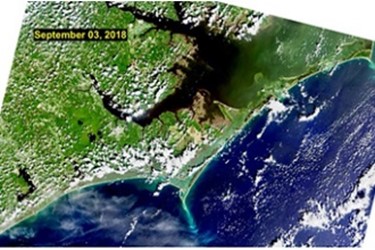 A historic 120-year-old data set is allowing researchers to confirm what data modeling systems have been predicting: climate change is increasing precipitation events like hurricanes, tropical storms and floods.

Researchers analyzed a continuous record kept since 1898 of tropical cyclone landfalls and rainfall associated with coastal North Carolina storms. They found that six of the seven highest precipitation events in the record have occurred within the last 20 years, according to the study.

"North Carolina has one of the highest impact zones of tropical cyclones in the world, and we have these carefully kept records that show us that the last 20 years of precipitation events have been off the charts," said Hans Paerl, a scientist at the UNC-Chapel Hill Institute of Marine Sciences.

Paerl is lead author of a paper reporting the results in the journal Scientific Reports.

Three storms in the past 20 years — hurricanes Floyd, Matthew and Florence — have resulted in abnormally large floods. The probability of these three flooding events occurring in such a short time period is 2%, according to the study. "Three extreme floods resulting from high rainfall tropical cyclone events in the past 20 years is a consequence of the increased moisture carrying capacity of tropical cyclones due to the warming climate."

In addition to the increasing number of storms and floods, the researchers found that a growing global population is compounding the problem by increasing emissions of greenhouse gases, leading to increases in ocean temperature, evaporation and precipitation from tropical cyclones.

"Understanding changes in the frequency and intensity of these storms is important because of the effects of storm-associated materials such as nutrients, carbon and sediments on coastal ecosystems," says Elizabeth Canuel, a program director in NSF's Division of Ocean Sciences, which funded the research.