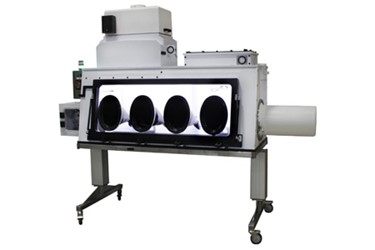 The purpose of this document is to serve as a case study where a containment device was designed to facilitate “interim containment”, or containment during the portion of a process where the product isn’t inside the enclosure. Rather, the product is intermittently contained between Point A (enclosure) and Point B (another enclosure or otherwise contained atmosphere). In this scenario, Flow Sciences designed an enclosure featuring a Getinge La Calhene DPTE® Alpha Rapid Transfer Port (RTP).

Background information regarding the client’s process and equipment is provided; particularly, how this information affected the decision-making process leading up to the engineering design of the enclosure. This includes a discussion on engineering decisions and development of design, level of containment, verification testing, and an explanation of how the Getinge La Calhene Alpha RTP combines with a transport capsule to yield leak-free containment during transport.

A client was in need of a containment enclosure for an analytical weighing and solution-preparation operation involving Highly Potent Active Pharmaceutical Ingredients (HPAPI) in powder form. Their goal was to transfer product from an enclosure to another enclosure. Internal policy stipulated that the operator’s 8-hour respiratory exposure concentration, expressed as an 8-hour Time Weighted Average (TWA), be less than 500 nanograms per cubic meter air (<500 ng/m3) in the breathing zone. Consultative discussions revealed to Flow Sciences that the client was using a Mettler analytical balance for weighing operations. Additionally, it was ascertained that the client was utilizing polyethylene DPTE® Beta Capsules (DPTE® PE Container) in other parts of the facility. The Beta containers were being used for safe transfer of cytotoxic product from one contained work area to a distant other.

When the basis of the design was submitted to the Flow Sciences design team, it was decided that the enclosure would be designed to include a Getinge La Calhene Alphaport to coincide with the Beta containers that the client already owned. A 24” x 14” Inlet HEPA and 24” x 14” Dual-HEPA Top – Mount fan / filter housing work in conjunction to create lateral, laminarflow across the work surface.  After air is captured by the inlet HEPA filter, the negative pressure top-mounted fan causes the air to slowly move laterally across the workspace. As a result, the statistical interferences of cross-contamination and product loss are attenuated.

When implemented into its practical environment, the enclosure seamlessly integrated into the client’s process flow. After product was weighed, it was containerized for transport. Even while containerized, an inherent exposure hazard still existed in the event of a catastrophic spill event during transport. Containment during product transport is yielded synergistically by the combination of the Alpha and Beta Rapid Transfer Ports, thereby serving as an engineering control for this hazard. As mentioned previously, the client possessed DPTE® PE [Beta] Containers. Now, as a result of the incorporation of an Alpha port on the side of the enclosure, operators were able to insert weighed, containerized product into the Beta Container by performing the following steps in chronological order:

In Flow Sciences’ in-house laboratory, the enclosure was tested in accordance with ISO 14644-1 – ISO Class 5 for particles ≥0.3µm/m3. The average result was of 2,276 particles with a diameter greater than 0.3 micrometers per cubic meter air (2,276 particles with diameter ≥0.3 µm per cubic meter air). Additionally, the enclosure provided personnel protection through its negative-pressure containment design and four (4) 10” oval glove ports on the front of the unit. Specifically, “personnel protection” entails employee protection from exposure via the respiratory and dermal routes of exposure. Similar enclosure models under the Glovebox Workstation (GBWS) series were evaluated internally by surrogate powder Testing. During this test, powdered lactose powder was manipulated into the interior of the enclosure while three operators performed operations similar to that of its real-world application. Air samples were taken in the breathing zone of the operator and in several locations throughout the Flow Sciences laboratory. Upon interpretation of the exposure data, Flow Sciences validated that the GBWS series contains down to a respiratory exposure concentration of 30 nanograms per cubic meter air (30 ng/m3), expressed as an 8-hour Time Weighted Average (TWA). Compared to the Occupational Exposure Limit (OEL) stipulated by the customer (<500 ng/m3), the validated containment level is sixteen-times (16x) lower; or 6% of the stipulated OEL.

The GBWS is capable of containing Today’s most toxic of powder substances and the operations that involve them. Ray Ryan, Founder and President of FSI states “Flow Sciences is a solution based company. Sometimes we have the solution on our shelves, but most of the time we have to develop a solution to fulfill that industry need”. This case study serves as a prime example of a project where Flow Sciences used a recently developed containment device and augmented to fit the specific needs of the client.