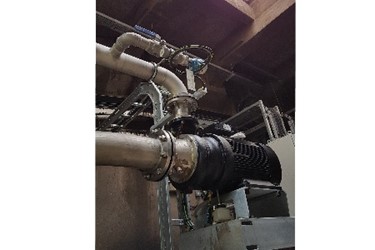 With a £60M investment aimed at producing 30% more green energy from its largest sewage treatment works, Severn Trent’s upgrade of its twelve anaerobic digesters has put people and pumps to the ultimate test.

Severn Trent are experienced in treating sludge with Advanced Digestion but converting its conventional digesters to a new thermal hydrolysis process involved a difficult transition phase requiring a specialist pump selection.  Treating wastewater from a population equivalent of 2.5 million people and industry in the Birmingham area, each 5,000m3 digester at Minworth STW built up an amount of settled grit and rag making the legacy sludge difficult to pump.

Severn Trent already generates approximately 34% of all the energy it uses as a business from renewables, and in seeking to reach a target of 50% by 2020, it brought in the trusted services of framework partners MWH Treatment to design and construct a 3-stream thermal hydrolysis plant (THP) using Cambi technology. Making the AD process more efficient also provides the additional benefit of sludge cake being classified as enhanced product fertiliser with potential use in the production of crops for human consumption. Severn Trent is a leader in renewable energy and the Minworth site already has Combined Heat & Power (CHP) that can generate over 8 MW continuously and a gas-to-grid process that produces up to 750 m3/hour of biomethane.

Cambi’s advanced THP reactors destroy pathogens prior to digestion. It is designed to treat 70,000 tonnes of (dry solids) sludge per year with a peak of 250 total dry solids (tds) per day.

For many years at Minworth, sludge was moved from holding tanks to digesters (for around 15 days retention time), then to secondary digesters, before going on to be dewatered.  As Richard Thomson, Project Director at MWH Treatment explains, upgrading to Cambi’s advanced digestion process also meant sourcing pumps that were capable of such a demanding duty point.

“We knew of other treatment plants that had issues with sludge recirculation”, he said, “and the head and the pipework distance were a concern in the design – not to mention the fact that the pumps would have to be capable of handling that very challenging legacy sludge without blockages or breakdowns”.

Installing the thermal hydrolysis process upstream of the existing digesters would see sludge screened, dewatered first to 22% then diluted to 16% before being hydrolysed. Then, inside reactor vessels for between 22 and 30 minutes, the sludge is held at a pressure of 6 bar and a temperature of 175 degrees to destroy pathogens.  To further break up the cell structure, the sludge is depressurised into flash tanks.  This vigorous disintegration process produces a hot hydrolysed sludge which is diluted 3 to 1 with sludge from the digesters and cooled in heat exchangers to bring its temperature down to 42 degrees.

“It is at this point where the crucial role of the pumps come in”, adds Richard Thomson.

‘The only chopper pump that could achieve what we needed’

“We knew that especially for the first few months, taking legacy sludge directly (at a flowrate of 20m3/hr, total head 5 bar) from the 12 digesters, all the way back through to the hydrolysis plant, would see the pumps face an arduous duty.  As it was, the decision on which manufacturer to work with was made easy in the end by Cambi who recommended Landia due to good performance on various sites.  This led to a healthy collaboration as we designed the most efficient solution for this very arduous application. In fact, Landia was the only chopper pump-that could achieve what we needed”.

During the selection stage, MWH Treatment and Landia looked long and hard at impeller sizes for the 30kW, 3,000 rpm chopper pumps, choosing a middle of the range size to allow for flexibility.

Richard Thomson added: “This design feature from Landia showed how versatile its pumps are – giving us the opportunity to change in the future if necessary.”.

The small footprint of the Landia pumps was also an important factor as space at Minworth STW is limited.  Richard Thomson and his team at MWH set about designing a series of pump-tables that fitted in with existing pipework configurations – and with removable wheels so that the units can be moved around in the confines of the digester galleries to allow for easy servicing at waist height.

“Since going on-line in March, April and July last year – four pumps at a time – one on each digester, they’ve been very good operationally, especially having to work under such duress for those first 3 months.  You could hear them chopping the troublesome filamentous material. From a process perspective, the chopper pump’s continuous maceration is very advantageous”.

‘All the more critical that the Landia pumps worked well’

Thomson explained that to cope with the backlog of existing sludge, flushing sequences were introduced to control the flows and mitigate the risk of blocking of plug valves from being too frequent. The plan worked – and now the flushing is no longer required, which is a remarkable achievement in the course of three retentions to convert traditional digesters to new hydrolysed sludge tanks. On a 2-year build programme, the three-to six months clean and shutdown required for 5000m3 digesters just wasn’t viable, which made it all the more critical that the Landia pumps worked well.

“On our SCADA we’ve been able to see the trending data on the pumps’ performance, including current, flows, head - demonstrating just how hard the duty was in those first three months. As the sludge has gradually improved, so has the efficiency of the pumps, with less rags meaning far less energy required. Not surprisingly, the pumps haven’t come through completely unscathed, but a couple of bearings and just one cutter replacement is nothing when one considers the sheer scale of the task in such an important and statement-making upgrade in energy recovery for the water industry”.