How A National Copier Dealer Transitioned To Digital Documents 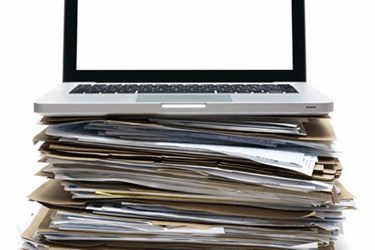 It is easy for Chris Scarff to say when the Ray Morgan Company transitioned from selling copiers to selling technology. Describing and executing that change is a little more complicated as the $37-billion industry born out of the photocopier has Ray Morgan Company focusing on its software as much as its sales pitch.

Ray Morgan Company grew as copiers became every offices can’t-live-without-it tool. These necessities sat in the office corner and provided one simple, vital service: making copies. All that started to change as the dawn of the digital age turned the photocopier from a duplication device into an office’s information hub.

Scarff started as a copier sales rep at Ray Morgan in 1996, around the same time digital copiers were introduced to the market. That’s about the time, Scarff says, Ray Morgan Company started to transition into a technology company.

“When I joined the company, digital copiers were just coming out, so I was still trained in old-school sales where faster meant better,” Scarff says. “Even back then, I knew the business was going to start changing with this new technology. I just could never have guessed how much.”

One of Scarff’s first decisions as the head of Ray Morgan Company’s brand new technology division was to partner with Long Beach, CA-based software developer Laserfiche. The organization was a pioneer of electronic document management software and helped make the concept of the paperless office reality through products that converted paper documents into electronic images. When Ray Morgan Company sales reps visited copier service accounts where filing cabinets were taking up too much office space, they would offer Laserfiche electronic records management as a solution.

“Our sales reps knew about Laserfiche but didn’t really focus on it,” Scarff says. “We had one Laserfiche sales rep who the copier reps would turn leads over to. It was still a fairly young technology, but because our customers knew and trusted the Ray Morgan Company name it made it a lot easier for us to introduce what was then a little-known technology.”

That same advantage has helped copier sales and service companies across the country to dominate the ranks of Laserfiche’s resellers, according to Laserfiche’s senior vice president of sales Hedy Belttary. Where some might view the digital document as a threat to those selling printing devices, copier sales and service businesses are increasingly capitalizing on a powerful technology helping its established accounts manage ever-growing demand for, and subsequent accumulation of, paper.

“Copier dealers really have a ready-made market for electronic records management sales built into their existing customer bases,” says Belttary. “They already have their customers’ trust from years of doing business together. So, it says a great deal about Laserfiche that so many of them entrust those customers to us.”

That’s because digital document technology did not slow the demand for office paper after its introduction. A study recently cited in the Wall Street Journal shows paper demand nearly doubled from 1995 to 2012, dropping off briefly during the economic downturn in 2008-09. In that same time, Ray Morgan Company grew from a staff of 45 to a staff of 450 — achieving $100 million in annual sales and over 25,000 customers.

As the piles of paper grew, electronic records management has grown from a novelty to a necessity. Global sales of the software systems are expected to grow from $28 billion to $66 billion over the next five years. Despite the numbers, Scarff says Ray Morgan Company is not banking on software sales replacing the hardware in its 20 locations any time soon. The technology is, however, fundamentally changing sales strategies as the power of the digital document opens up a whole new way of working with office information.

As the software is automating more and more aspects of office operations, the sales message at Ray Morgan Company has increasingly focused on educating customers on how much more the technology can do for them. That requires a savvier sales force, so a few years back the company started investing more time and money in training and improving its Laserfiche reps, continuing its path away from copier sales and into technology solutions.

“The impact our sales reps have on customers is so much greater,” Scarff says. “There are so many more opportunities to make a sale but those sales involve more people. Reps now need to know how to organize and get a team to help them sell a successful solution. To do that, they need a deep understanding of each customer’s document management requirements and those can differ dramatically from customer to customer.”

Where the old copier provided the same, very limited function, today’s multifunction printers are serving as the information gateway for paperwork coming into an office. For Ray Morgan Company customers, that gateway increasingly opens into a Laserfiche electronic records repository that enables organizations to leverage business process automation.

While Ray Morgan Company’s largest customers may embrace the digital age, there are still many who rely more on paper than computers, Scarff says. Transitioning to digital means more than buying a faster, fancier copier; it’s a whole new way of running an office that many customers can be reluctant to commit to. But at the end of the day, the bottom line can change a lot of minds. Savings from business process automation can sway even the most skeptical mind.

“While every customer is different, we always come down to the same question: How can we help you reduce costs, increase efficiency, and meet security and sustainability initiatives?” Scarff says. “With Laserfiche and the right multifunctional device solutions we can save customers a tremendous amount of time and then they can redeploy those employees to other tasks. It affects their bottom line in a positive way.”

Tim Wacker is a technical writer for NBN Communications, a writing and research services company based in New York. He can be reached at Tim.wacker@nbnpresscom.com