From Concept To Reality: Fujifilm Forges A Path To Future Growth With SUT In 2009, Fujifilm Diosynth Biotechnologies (Fujifilm), a biologics CDMO for over 20 years, sought to expand its cell culture operations to meet the industry’s need for more manufacturing capacity. The company’s traditional practice was to use stainless steel for its drug development processes; however, previous capacity expansion proposals to use stainless steel were too expensive or took too long. For this reason, Fujifilm began to look at single-use technology (SUT), as it showed real potential to reduce the cost and timeline of development considerably. But would it offer the same performance as stainless steel when it came to cell growth, cellular productivity, and product quality? By learning the answer to this question and others about SUT, Fujifilm was able to use its knowledge as early adopters, expand its business capabilities, and, as a result, look forward to new growth well into the future.

Putting SUT To The Test

To find out what SUT was capable of, Fujifilm’s team conducted initial proof-of-concept bioreactor evaluations at North Carolina State University and further extensive studies in-house at Fujifilm. Comparability studies were conducted among 110-liter (L) stainless steel bioreactors, a 200 L single-use bioreactor (SUB) in the development labs, and a 1,000 L SUB installed into a GMP manufacturing facility. The team adjusted the engineering parameters to create an environment where cells did not know the difference between a stainless single bioreactor and a SUB in regard to mixing and gas exchange. While the outputs did not have to be identical among the different bioreactors, the goal was to bring them within expected ranges for cell growth, product titer, and key product quality attributes. The results of those studies are depicted in the graphs below. 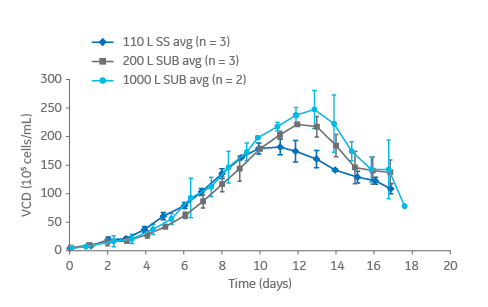 The first graph shows a plot of cell density versus time. In a comparison among the three different bioreactors, the results show a higher cell growth for CHO cultures in the SUBs than the stainless steel reactors. The higher cell growth in the SUBs was attributed to better mixing and mass transfer. Key product quality measures were also within target ranges showing that SUT had potential as a viable alternative to stainless steel for bioprocess manufacturing.

The next graph shows a plot of grams of product per liter versus time, where the product titer was nearly the same for all three bioreactors. 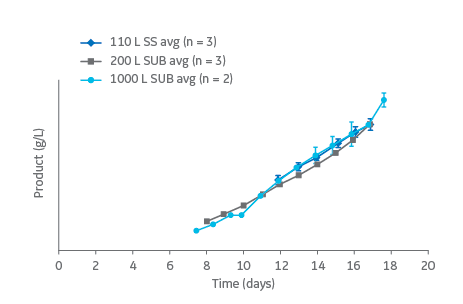 Because of these results, the team gained confidence in the implementation of SUT for Fujifilm’s cell culture expansion in 2012. The team took specific factors into consideration when deciding which bioreactors to purchase. Those factors were:

Because of qualities similar to stainless steel, such as mixing and mass transfer, an advanced control system, and ability to run recipe software, the GE Xcellerex™ portfolio was ultimately selected for Fujifilm’s first expansion at its Research Triangle Park (RTP) facility in North Carolina. GE’s Xcellerex equipment allows flexibility for processing from 20 to 100 percent reactor volume and a selection of sparger types to optimize gassing strategies. It also offers high-quality hardware and software (bag design) engineering. Specifically, Fujifilm employed the Xcellerex 1,000 L XDR SUB as well as an ÄKTA™ ready purification system in a newly renovated GMP cell culture suite. Successful operation of this suite to produce CHO mAb- and baculovirus-based GMP manufacturing batches provided Fujifilm the confidence to invest in further expansions to increase its capacity output.

Building A Future With SUT

Leveraging the experience of the RTP expansion, Fujifilm opened a new mammalian cell culture cGMP manufacturing facility in 2013 in the UK that primarily utilizes SUT for both upstream and downstream operations. The facility, which was the first of its kind in the UK, was built and commissioned in 14 months. It was equipped with a single-use GE WAVE Bioreactor™ system, 200 L and 1,000 L Xcellerex XDR cell culture suite, and ÄKTA ready chromatography systems and ReadyToProcess™ prepacked columns. The facility is designed for rapid expansion to meet customer demands, and it provides customers with a full life cycle offering for mammalian cell culture biopharmaceuticals.

Continuing its reliance on SUT for new growth and opportunity, Fujifilm later added an Xcellerex XDR 2,000 L bioreactor at the RTP facility to supplement a 2,000 L stainless steel train for the GMP production of mammalian cell culture biopharmaceuticals. With each expansion, Fujifilm was able to leverage previous projects to streamline the next. This approach, combined with commonality of reactor design between sites, allowed for a 2,000 L SUB installation in the UK facility to be completed and operational for GMP manufacturing within six weeks of equipment delivery. Not only was this reactor start-up done in a record time for Fujifilm and the industry, but the quick installation also allowed Fujifilm to meet its manufacturing obligations. 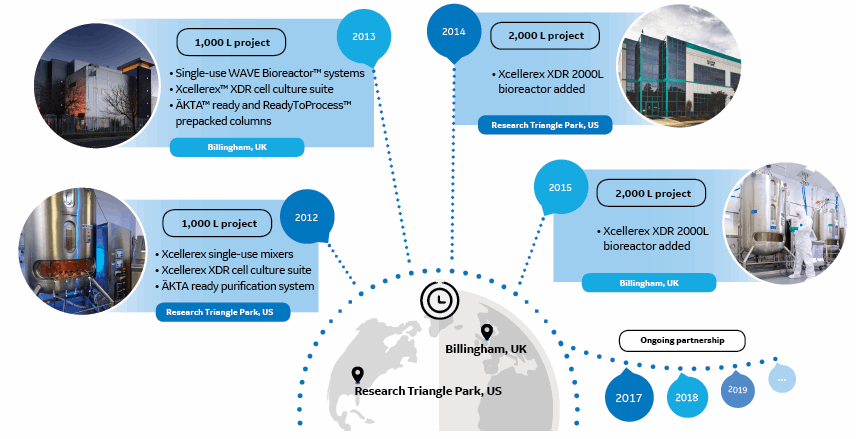 As its single-use journey continues, Fujifilm is bringing on-line another all single-use facility in the United States. The facility will contain three 2,000 L single-use bioreactors with a standard seed train, designed for production of one batch per week with titers ranging from 2 to 8 grams per liter. The design ability to standardize equipment and unit operations to run Fujifilm’s mAb platform processes while also accommodating client cell lines with varying titer was not trivial and is actually a unique accomplishment. To handle the range of downstream throughput (kilograms of product purified) resulting from various product titers at harvest, Fujifilm was able to define column sizes, cycling strategies, and single-use mixer sizes that would accommodate small, medium, and large downstream process volumes and consumables configurations. The facility has ample space to employ up to 12 reactors for production of several batches per week to accommodate future business opportunities.

Overall, SUT has provided Fujifilm with extensive opportunities in the biopharmaceutical space, for both CHO mAb and non-mAb products and baculovirus-expressed products for clinical and soon-to-be commercial production. This gives them a competitive advantage in a growing market, and it also equips them with innovative technology that can aid the industry in supplying patients with lifesaving medicines. 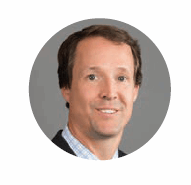 Stewart McNaull, Ph.D., has nearly 20 years of experience in biopharmaceutical process development and manufacturing with a focus towards driving new technology innovation to the manufacturing floor. McNaull has led upstream process development and GMP manufacturing groups, managing clinical and commercial program supply. He has been a leader in the evaluation of single-use technologies and has played a key role in the design and implementation of five cGMP single-use manufacturing streams globally. Stewart has designed several innovation initiatives and provided the vision for new sales and marketing launches based on these programs. With these launches he led the technical sales efforts to link new technical offerings with client needs for growth. Stewart maintains a strong industry presence by presenting at major conferences and as a steering committee member of the BPOG industry consortium for Technology Roadmapping.