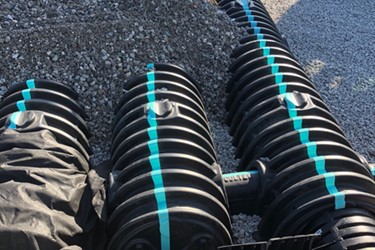 A stormwater management system designed for a new convenience store in Sarasota, FL, required a sophisticated and elaborate approach. When it was completed earlier this year, the complex system resulted in huge money and time savings for the property owner, which will enable the store to open this fall.

“This is the most comprehensive install we’ve ever done,’’ said Scott Tonitis of Elite Development Services. “There were a lot of obstacles, but in the end, the owner was very pleased that we were able to get it done and save him a lot of time and money.”

The project centers on the construction of Wawa, a 24-hour convenience store. Gates Construction serves as the general contractor for the Philadelphia-area based chain, which is expanding aggressively in The Sunshine State. The chain has more than 700 stores, mostly in mid-Atlantic states, and opened its first store in Florida in 2012. More than 200 Wawas are expected to be open in Florida by 2022.

The site for the Sarasota store posed several challenges for Tonitis and his Elite Development Services team. The store shares the parcel with a furniture store, a long-time tenant at the site. The store needed to remain open during construction, which dramatically reduced the imprint in which Tonitis and his team could store and utilize equipment.

Florida’s topography created additional design problems. The groundwater is close to the surface, and the site included several ponds that needed to be filled in so that engineers could provide adequate parking for the store. More problems emerged when crews started to dig lines to install the system.

“There was a lot of existing landscaping, trees, and utility valve vaults.  We knew about some of them,’’ Tonitis said. “Others we did not. We had to go around them and modify the system as we went. We installed the system according to the engineer’s requirements for water storage, but we had to get creative in how we solved it.” 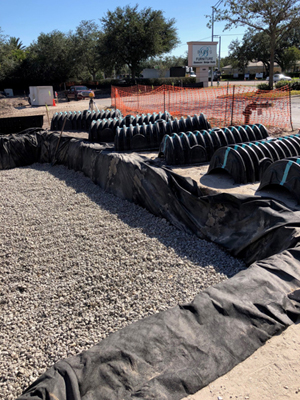 The underground electrical vaults proved particularly troublesome — and dangerous. There were also fire suppression piping and fittings that forced Tonitis and his team to adjust the system as they encountered the encumbrances.

The original stormwater management plan included the use of concrete vaults to steer water away from the property. When Tonitis discovered the site issues, he recommended the design engineer consider using plastic stormwater chambers manufactured by CULTEC.  “The concrete products would not have been available for months, so I knew we could get it done much more quickly with the CULTEC products,’’ Tonitis said. “The concrete vault system was about two and a half times more costly than the CULTEC system and it would save about 50 percent on labor costs. I told the owner we could save about a half-million dollars by using the plastic chambers. He was thrilled.”

“Concrete vault systems are expensive,’’ said Dan Gera, a Technical Specialist for CULTEC. “Once a system is designed with concrete, the cost savings have to be so great that the developer will go back to the developer to redesign the system. We give the consultant as much information as we can to make it a plug-and-play system. We don’t take credit for the design. We pride ourselves on giving them as much information as possible.”

The system that Tonitis eventually installed was one of the most elaborate he has ever encountered. Working with a computer-assisted program on CULTEC’s website, Bohler Engineering designed a system that included 21 sections of various sizes. While most stormwater systems are long, linear systems that are stitched together with feed connections, the design for the Sarasota project required a complicated map that carries stormwater away from the property in smaller, bite-sized positions.

The complex design included 1,023 Recharger 180HD chambers. They measure 7.33 feet (2.33 meters) and are 36 inches (914 millimeters) wide. They offer 163 gallons of storage, or 3.45 ft3/ft. The mid-size chamber is typically used for installations with depth restrictions or when a larger infiltrative area is needed. In all, Elite Development laid down 116 rows to manage nearly 23,900 cubic square feet. The system was topped with 2,178 tons of crushed stone.

The store is expected to open in October 2018. The first Wawa opened in 1964 in Folsom, PA, a suburb of Philadelphia. It is known for its touchscreen ordering and deli-style sandwich counters. The business ranked 34th in the Forbes list of private companies in 2015 with total revenues of $9.68 billion. Wawa employs more than 30,000 workers.

“I grew up in the business, and this is the most comprehensive install we’ve ever done,’’ Tonitis said. “There were a lot of obstacles, but in the end, the owner was very pleased that we were able to get it done and save him a lot of time and money.”

Thomas Renner is an award-winning journalist based in Connecticut who writes frequently on construction, manufacturing and other trades.