By Sarah Nicastro, publisher/editor in chief, Field Technologies
Follow Us 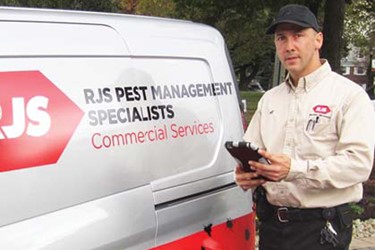 RJS Pest Management (RJS) was founded in 2005 and has since been providing commercial pest control services to businesses in the greater New York City metropolitan area. The company currently employs 35 field technicians who focus specifically on large-scale commercial properties, such as hotels. Most of RJS’ customers (approximately 90 percent) contract with the company for preventative services, so typically a technician will have five to 10 scheduled stops on a routed work day. The other 10 percent of RJS’ business is comprised of callbacks and additional requests from these customers, or one-off jobs.

RJS has experienced significant growth the past few years, and the company has made a concerted effort from a sales perspective to set up customers on a recurring revenue model. “Predictability is the name of the game. Recurring revenue is a big focus in terms of our growth plan,” says Mike Malan, director of business development strategy at RJS. To assist the company in its sales efforts, RJS invested in Salesforce Sales Cloud to ensure that every lead is worked and that all touchpoints are tracked. Salesforce helped RJS to streamline its sales process, which contributed to the company’s growth.

In 2014, RJS rolled out a field service management system to accomplish the goal of better connecting its back office and field operations. RJS evaluated a number of pest industry-specific systems before considering a broader field service solution. “We looked at a few pest-specific solutions and we just weren’t impressed. Also, a number of our competitors were using those solutions, so we kind of took a step back and said ‘maybe this is an opportunity to differentiate ourselves,’” says Malan. RJS worked with the field service software company to customize its solution, and deployed it in 2014.

Costly Customizations, Abysmal Support Cause Problems
“We were relatively happy with the solution for a few years, but it definitely had some limitations,” explains Malan. “One of the biggest issues we had was the lack of ability to customize and continually improve the solution in-house. We had to go back to the vendor anytime we wanted to add or change something — even really simple things — and that was very costly. The other challenge was that the support was abysmal. Sometimes we waited weeks to get an answer to a question.”

RJS had begun thinking through what its next move would be when it learned of the introduction of Salesforce’s Field Service Lightning in the fall of 2016. “We’d been thinking about making a change but not really acting on it yet, and that was sort of our ‘aha moment,’” says Malan. The company liked what it saw with Field Service Lightning, and began implementing the solution in February of 2017.

From mid-February to the beginning of July, RJS worked with a Salesforce solution provider to customize the Field Service Lightning application to meet its specifications and get the system ready for go-live. RJS chose to launch the new system on July 4th, 2017, because the field technicians wouldn’t be working that day, so the company could avoid downtime. “We did a walk, crawl, run process where we rolled it out to our more technologically adept users first, which was typically younger service technicians who were familiar and comfortable with technology and who we felt could really spearhead the rollout for us,” says Malan.

“When we need to make any changes to the solution, we no longer have to pay a developer $4,000 a pop — we can go in and make a lot of those simple changes ourselves.”

RJS deployed to five technicians first, who Malan trained firsthand, one by one. “I spent an hour with each of them going over usage of the system, answering questions they had, and providing some PDFs and videos for reference,” says Malan. “I was expecting some user acceptance issues just in changing from one system to another, but we didn’t really encounter that. It was a smooth process.”

After the initial deployment, RJS rolled the solution out to its remaining workforce by training five new technicians every two weeks. “It was a slow rollout; we took our time. We tackled some of the older technicians not as adept at technology use last. With the slow rollout, we were able to get and incorporate feedback from the technicians as we went along,” says Malan.

The Value Of An Integrated Platform
One of the biggest benefits to RJS of deploying Field Service Lightning was no longer working in two systems, which had a significant impact on efficiency. “Before Field Service Lightning, we’d have to manually take the information we were gathering from the sales process out of Salesforce, and then input it into our field service software to schedule and route jobs. It was dual-data entry, and it was a big waste of time from an efficiency and productivity standpoint,” says Malan. With Field Service Lightning in place, RJS was able to reduce the time spent dispatching and routing by 81 percent.

Having an integrated platform also gives RJS a more comprehensive view of its business, which provides useful data not only for the company itself but also for its customer base. “The opportunity for us from a reporting and data analytics standpoint is significant,” says Malan. “Instead of having to export reports to Excel, we have a complete snapshot and history of our entire business in one platform. For instance, if we sell a job for two hours of service, we are able to easily see if it’s taking three or four instead and make adjustments. From a customer standpoint, we can differentiate ourselves from our competition by providing data to them our competitors can’t. For example, a hotel customer can ask for data on the last time rooms were inspected, if there’s ever been a specific pest problem in a room, etc. They’re asking for historical data, and none of our competitors provide that – but we can.” All of the data field technicians input using the Field Service Lightning app in the field is updated in real-time in the back office, and while on site, field technicians have access to complete customer history.

Another aspect of the solution that’s been very valuable for RJS is its flexibility. “Keeping iPhones was important to us, but with the solution we used before we were locked into the iPhone 6 — we couldn’t upgrade without significant cost of upgrading the software,” says Malan. “Now, we can easily upgrade devices without any impact to the software. When we need to make any changes to the solution, we no longer have to pay a developer $4,000 a pop — we can go in and make a lot of those simple changes ourselves.” Malan estimates that RJS was making approximately 10 changes to its previous solution a year, at a cost of around $4,000 each — totaling $40,000 each year just to make adjustments to an already-deployed solution.

RJS’ focus moving forward is to continue to address the needs of its customers and look for ways to differentiate itself from competition. This includes working to build out a customer portal as well as developing customer loyalty programs.