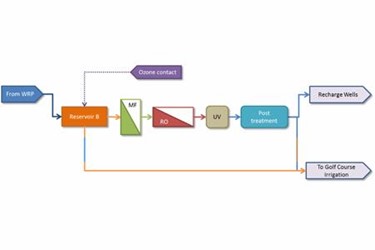 Depletion of water supplies for potable and irrigation use has been a major problem in the world. Some areas in the US are facing challenges to reliably provide clean water to its population. These challenges require municipalities to pursue sustainable supply options such as Indirect Potable Reuse (IPR). IPR has become a sustainable alternative water supply. In IPR, municipal wastewater is treated and injected into a groundwater aquifer via vadose zone wells, spreading basins or other means in which water percolates through the unsaturated soil into the aquifer. The intent of IPR is to diversify water sources in order to maximize reliability of the region’s water supply.

City of Scottsdale Water Campus is one of the largest and most advanced IPR facilities in the world. The Advance Water Treatment (AWT) Facility was commissioned in 1999 with initial capacity of 6 million gallons per day (MGD). It was one of the first wastewater treatment plants to use microfiltration (MF) and reverse osmosis (RO) for treating effluent from a wastewater treatment plant for injection into groundwater aquifer. It is now operating at 85% recovery with the capacity to produce 20 MGD of RO treated water for golf course irrigation and aquifer recharge.