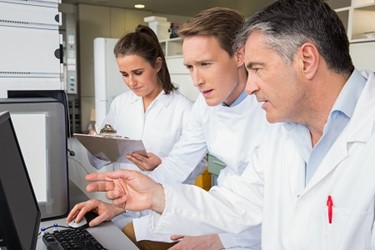 Objective: The objective of this study was to develop and support a process for assessing the comparability of data used in global clinical trials from four individual laboratories, wholly owned by the same central laboratory entity, and that the same tests on the same samples are under statistical control and acceptable limits of variation.

Relevance: Data from central laboratories have been key for assessing safety, tolerability, and efficacy of new drugs in clinical trials. With the increasing complexity and global scale of many clinical trials, it is important to maintain harmonization among the regional laboratories as part of a central laboratory participating in the same study. This is usually accomplished by maintaining standardized operating procedures (SOPs) and identical assay platforms, calibrators, and quality control material across all laboratories. However, continuous monitoring of the same samples run at all laboratory locations may not be common practice.

Methodology: The interlaboratory comparison program was established in 2006 and involves locations in the US, Europe, Singapore, and China. The program involves multiple platforms to assess over 40 analytes tested globally, encompassing several therapeutic areas including Oncology, Cardiometabolic, Infectious disease and others. Pooled serum/plasma/urine samples were aliquoted, frozen at -70ºC, and distributed quarterly to each laboratory for weekly analysis. Here we present the dataset for forty-one tests using multiple platforms. Samples were analyzed weekly on the same day at each laboratory for twelve months (N= 520). College of American Pathologist evaluation limits, the Westgard Biological Variation Database, and the Royal College of Pathologist of Australasia Quality Assurance Program were sources used to establish acceptable bias criteria. The percent and absolute bias was calculated for each result using the US laboratory as the reference laboratory. The percent bias for each week and month was also calculated. A Bland-Altman plot was created between each laboratory and the reference laboratory for the six month period, and a student T-test run using a relative bias limit for each test and a significance level of 5%.

Results: Overall, during the twelve month period, all forty-one tests had a twelve month mean bias within the acceptable bias limit for each individual test compared to the reference laboratory. When comparing the mean weekly bias for each tests from all laboratories, any week where the bias was outside acceptable limits, investigation and corrective action was undertaken to determine the source of the error. Examples include:

Conclusion: An interlaboratory program where frequent monitoring of identical samples run at all laboratories involved in clinical trials can provide valuable information into the harmonization of data reported by the central laboratory, and help mitigate pre-analytic, analytic, and post-analytic issues that may arise when assessing data used in the development of new therapeutics.