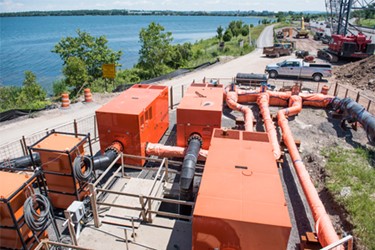 When the West Side sewage pump station in Onondaga County, New York, prepared to undergo its first major upgrade in over 30 years, the project required a bypass system to move a peak flow of 30 million gallons per day (MGD). C.O. Falter Construction was named the bypass contractor for the project and worked with Xylem to design and install a temporary system to convey the full amount of flow.

While the initial design called for using the station’s existing pumps, during a plan review, a dewatering application engineer with Xylem calculated that the existing pumps would only bear 19 MGD of water.