We all love it when a plan comes together.

In July 1952 in Arkansas, when President Harry S. Truman dedicated the Bull Shoals dam on the White River, which created Bull Shoals Lake, it, as planned, brought about a boom in tourism — and how.

Perhaps not even the man who said that ‘America was built on courage, on imagination and an unbeatable determination to do the job at hand’ could have envisioned that today, according to The Arkansas Game and Fish Commission, Bull Shoals’ fishery is worth (annually) an astonishing $705M. And when taking into consideration all the other visitor spending factors such as food, lodging and transportation, that figure rises to an incredible $1.5B each year for Arkansas. The largest lake in The Natural State, with 45,440 acres of water and a 1,000-mile shoreline, Bull Shoals Lake stretches along Arkansas's northern border and into southern Missouri.

Ranked in the Top 5 trout fisheries in the world, the pristine welcoming waters of the White River sit just a stone’s throw away from … the water and wastewater treatment plant (WWTP) at Bull Shoals.

‘Blend in with the local landscape’

Described by Dr David Nixon, the Mayor of Bull Shoals as ‘technologically sophisticated and aesthetically pleasing’, the recently upgraded plant has been very carefully designed to blend in with the local landscape — but for the due diligence and sheer hard work of keeping the old plant (designed for 20 years, but still running after 40) — in safe working order, the operators of Bull Shoals’ WWTP deserve the highest possible praise for protecting such a hugely important area.

Built in 1976, the original above-ground steel plant, just 30 yards from the precious White River, had, towards the end of its life, begun to resemble more of a rusty patchwork quilt. For all the continuous repatching, reworking and rebuilding, the plant presenting a possibility of failure would have been disastrous.

‘A failure would have been truly devastating’

“Our ecology here is wonderful,” said Bull Shoals’ Mayor, David Nixon. “It is vital that we protect it. A failure would have been truly devastating for the local and regional economy, for who knows how long.”

He added: “We knew we’d reached the time where we had to really push for some funding to bring in a new, modern treatment system — but it is such a credit to Jim Chorba, our Public Works Director, that despite the age and condition of the old plant, it was still giving out great samples. Nursing all that equipment to keep it running; he is a treasure to the City.” 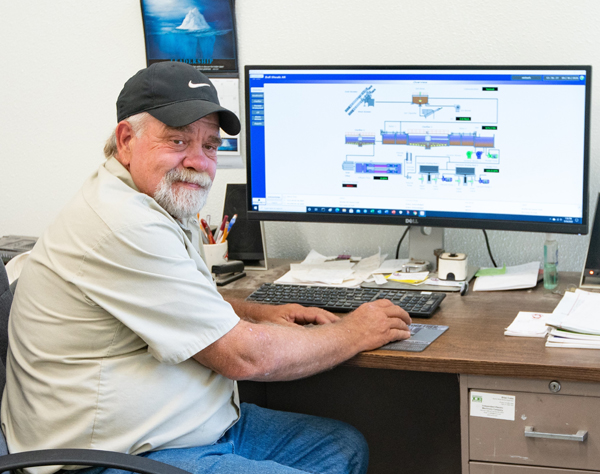 Before any bidding process could begin for a brand-new wastewater treatment facility, The City of Bull Shoals needed to know at the very earliest stage what sort of costs would be involved, so that it could determine what its targets would be for funding.

‘We needed a truly first-class facility’

Mayor David Nixon said: “We knew one thing for certain that here, where our water is the intrinsic element to the wellbeing of so many people, we needed a truly first-class facility. We also needed an upgraded collection system for our sewer system, which has 19 lift stations.”

Independent consulting engineer Mike Marlar P.E. was brought in initially to lend his considerable experience as to what would be the best investment for Bull Shoals.

“After years of managing a very old plant to prevent an escape of raw water, this was a tremendous opportunity to work with the City on a new wastewater treatment facility that would do justice to its surroundings,” said Marlar.

“The new plant needed to be one structure — concrete, so less prone to corrosion than the old steel plant — and unlike the existing tank, mainly below ground, with more sympathetic lighting — because just across the river is one of the most popular campgrounds in Arkansas.”

He added: “Reliability was a must, yet equipment that was also easy to work with and low on maintenance, with room for future expansion, including tertiary filtration downstream of the clarifier and two aeration tracks for redundancy. As well as eliminating any risks, we also wanted to comfortably exceed state discharge limits.”

The two projects — the wastewater treatment facility and the installation of a new collection system for the city’s sewer system were to cost $9.5M (This cost included building a new plant on a tight site, while keeping the old plant running, and then site clearing the old plant).

Mayor David Nixon continued: “We aimed high, but we were confident to tell our engineers and designers to give us their very best. Of course, things took time with funding, but the close proximity of the plant to the White River and its huge importance to the economy meant that we saw generous support from multiple federal agencies.”

In May 2017, voters in Bull Shoals approved a 1 percent sales tax to repay a $3.5M loan awarded to the city by the U.S. Department of Agriculture’s Rural Development division to help fund the new plant. That sales tax will expire as soon as the city repays the loan. 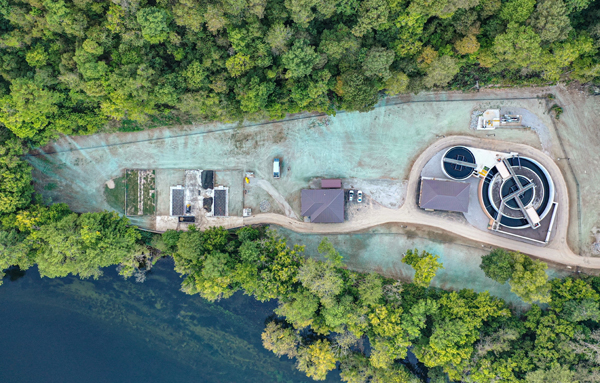 After much deliberation, homework and recommendations, the City of Bull Shoals chose to invest in an E.A. Aerotor Plant, which quite unlike typical small package plants, incorporates all components of a large scale, extended aeration/complete mix process in conjunction with final clarification. Made by Illiniois-based Lakeside Equipment Corporation (established 1928), the E.A. Aerotor Plant is custom-designed to provide optimum performance at the lowest possible cost with the Closed Loop Reactor (CLR) and Spiraflo Clarifier tailored to meet the specific requirements of Bull Shoals. To save space and reduce installation costs, the equipment was provided in a common, circular wall design, with the outer loop utilizing the CLR process for extended aeration, while the inner area incorporates the Spiraflo Clarifier for final settling.

Jim Chobra, the Public Works Director for Bull Shoals, who among his many duties, runs the WWTP, said:

“For a treatment plant, right next to the third largest trout river in the U.S., we just couldn’t be in a worse position — right where our effluent goes in, so when it came to the new equipment, we went out to other sites to see and hear first-hand about what was out there. We saw two Lakeside units that caught our eye and heard very good reports from the operators.”

He added: “Deactivating the old plant to get the new one online was quite a challenge, with a tight deadline, but the seeding process was very successful. We had wonderful clear water within 24 hours. It works beautifully.”

Mayor David Nixon agreed: “Some said it would take two months for everything to settle, but we had good water in very quick time, which is credit again to Chorba and the guidance we had from Mike Marlar. We didn’t skip a beat when switching over from the old plant to the new. The first samples just seven days later were well within compliance.”

The E.A. Aerotor Plant actually provides the same treatment results as a stand-alone Closed Loop Reactor Process. Activated sludge can reside in the reactor basin for up to 24 hours in the extended aeration process, followed by continuous clarification using the Spiraflo Clarifier — removing as much as 96 percent BOD and Suspended Solids — and provide as much as 99 percent nitrification.

Mike Marlar continued: “When we went online in May 2020, we were, as Mayor Nixon stated, immediately within compliance. I’ve used Lakeside equipment before and really like how their rotors work — the fact that they have very few moving parts — and that you can easily adjust them to increase or decrease the oxygen transfer. It has very simple ease of operation.”

The rotors that Mike Marlar refers to are the Magna Rotors — a vital component of the CLR process. These horizontal, bladed rotor aerators provide oxygen and mixing to the basin, providing greater oxygen transfer than any other mechanical surface aerator. Shaft-mounted drives also allow flexibility for speed changes and easy access for maintenance.

The investment also included the Spiraflo Clarifier, which minimizes many of the problems associated with center-feed peripheral take-off clarifier hydraulics, such as the Waterfall Effect, which is totally eliminated.

Bull Shoals benefits too now from a Raptor Fine Screen, which combines four processes in one unit (screening, washing, compacting and dewatering). Captured screenings are washed free of most organics to approximately 40 percent solids. Volume is reduced by 50 percent and weight by 67 percent, thereby reducing disposal cost. And to remove inorganic grit from the new treatment plant in a mechanically induced vortex environment, there is the SpiraGrit, which has rotating paddles that maintain the flow velocity in the vortex chamber, keeping organics in suspension while allowing heavier grit to settle on the chamber floor. The settled grit moves across the floor and falls into the lower grit hopper.

For Chorba, who is one of a team of just two for the plant, his 15-plus years of protecting Bull Shoals continues.

“We are watched closely and heavily at this plant and that’s fine with me”, he says. “I’m a stickler, who likes keeping everything in order, including records. Previously, when we had no redundancy in the old plant, we had to hustle. I won’t miss that. I’m just pleased that the financers understood the magnitude of what we have here and why it is so important. This Lakeside plant works very well.”

Mayor David Nixon concluded: “Overall, we now have an outstanding plant. When we show it to visitors, we don’t expect them to say it, but they comment on how lovely it is — and they’re right. It’s a tribute to all the work in the design phase that the new plant blends into the point that people aren’t aware of it. It doesn’t even make any noise like the old plant did, so it improves the experience for people enjoying all the many great outdoor activities that people love at Bull Shoals. Even the lighting design means that we have plenty for safe work, but again without being intrusive to the local environment. We chose right with Lakeside and know what a good investment the plant is for the long term. Compared to what we had before, we all sleep much better these days.”