Much like a typical household shower, oil wells experience a buildup of mineral deposit after extended use, causing them to become clogged. Pumping oil therefore becomes less efficient— driving up costs especially if the well needs to be shut down for a long period of time. Current methods used to clean clogged oil wells are only moderately effective. They also tend to be harmful to the environment and require costly downtime. An alternative is to dig more wells, abandoning the clogged ones, but this also raises environmental and cost-related concerns.

Olson Technologies addresses these issues with its Plasma Blaster, a tool that can unclog an oil well quickly, efficiently and cost-effectively. This proprietary green technology cleanses the pipes of existing wells without introducing harmful chemicals into the well and surrounding groundwater, safeguarding the environment and eliminating the need to dig more oil wells.

An environmentally friendly solution, the Plasma Blaster relies on a massive charge of energy, rather than chemicals, to clear the debris out of clogged well pipe holes. The technology, which explodes a small filament with a DC voltage, works like a photoflash. A capacitor is charged, and then a high current is discharged at 4,500 volts, causing the filament to explode. The blast creates a plasma arc that blows the crystallized oil components, paraffin and other unwanted materials out of the pipes.

The Plasma Blaster avoids the risks associated with other well-cleaning methods. Explosives, for example, can damage the well and cannot be performed repeatedly, while using acid introduces harmful chemicals into the ground and surrounding area. The technology also eliminates the risk of well fires, as it requires no oxygen to detonate.

There is, however, just one issue with the Plasma Blaster: Because it operates underground and at very high speeds, it has been difficult for Olson engineers to see their technology in action. So they turned to digital high-speed cameras from Vision Research to give them a new direct view of the pipe cleaning process.

To simulate the pipe cleaning process, the team placed the 12-foot Plasma Blaster inside a plexiglass container and set up a high-speed digital camera—Vision Research’s Phantom v2511—to document the blast.

PHANTOM ULTRAHIGH SPEED GIVES A CLOSER LOOK
The Plasma Blaster is typically used in wells 20 to 30 feet underground, so CEO Thomas Olson and his team of engineers decided to conduct an aboveground experiment. To simulate the pipe cleaning process, they placed the 12-foot Plasma Blaster inside a custom-made plexiglass container. They also set up a high-speed digital camera, Vision Research’s Phantom v2511, to document the blast, enabling the engineers to study the exact interaction of the plasma blaster and clogged pipe holes.

To capture the plasma blasting process, which is essentially a lightning strike, the team required a camera with exceptional speed. “To even get close to seeing the initial arc of the energy, we would have to be at one million frames per second,” said Joshua Turner, cinematographer and camera operator. “Capturing the blast would put us somewhere between 35,000 and 50,000 frames per second.”

The engineers chose Vision Research’s Phantom v2511 for its ability to record up to 1,000,000 fps. They paired it with a Canon EF-70-200mm 2.8L IS II lens and wireless control interface, which would allow them to maintain a safe distance from the blast. To illuminate the blast at the high frame rate, they also used a special, flicker-free light source. Finally, engineers placed red dye in the inner chamber of the pipe as a contrasting element so they could see the movement caused by the Plasma Blaster. 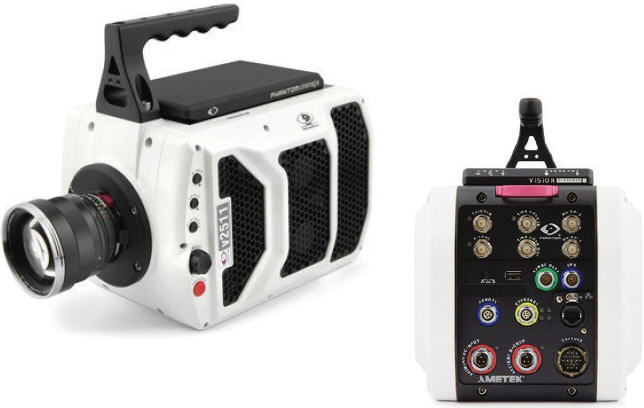 THE BENEFITS OF DIGITAL HIGH-SPEED VIDEO
Thanks to Vision Research’s Phantom v2511, Olson and his team were able to see what their Plasma Blaster does in an oil well 30 feet underground—notably, the blast reaction and liquid retraction. Whenever a detonation or blast of some kind occurs under a liquid (in this case, oil), the fluid is briefly displaced. As the oil quickly moves to refill the unoccupied space, a powerful vacuum is created, which sucks the loosened debris into the bottom of the Plasma Blaster. By utilizing the vacuum in this way, Olson Technologies removes the original source of the clog and lessens the chances that another issue will happen in the future.

This visual analysis demonstrates that the Plasma Blaster is an extremely effective well-cleaning tool. It has also allowed Olson Technologies to finetune its designs by showing them where they could make a tighter, more powerful blast pattern.

Thanks to the camera, the team could see the Plasma Blaster in action: when the blast occurs, the oil is briefly displaced. As it moves to fill the unoccupied space, a vacuum is created—loosening the debris.