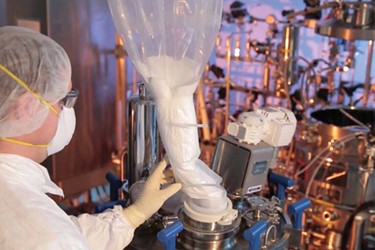 Currently, biopharmaceutical companies are striving to produce biologics more efficiently, with a lower cost point and fewer people. Most small-scale media and buffer operations are carried out with small bottles of liquid media, but as processes are scaled up to manufacturing levels, that is no longer a viable option. Costs of shipping liquid are simply prohibitive, so the industry has migrated to using media and buffer in a powder form. In fact, 90% of cell-culture media and buffer for sale is now in powder form, which needs to be hydrated, mixed and packaged to be used in the process. This “just in time” hydration allows for increased compliance and process efficiency.1

One of the biggest concerns with this process is that it could become an entryway for contaminants to enter the process. Everyone remembers the story of a high-profile biologics company that had a facilitywide animal virus contamination, and how it resulted in shortages of vital medicines and a long shutdown to determine the root cause. To reduce the chances of such contamination, the entire system must be closed.

Making biologics safely also means designing the process to reduce contamination risk at every step, even those that may not seem obvious. One of those often overlooked steps is mixing media and buffer powder during the process. It is still common to see people pouring open buckets of powdered media into a mixing tank, with powder flying into the air and around the room. This leads to a dirty environment that is hard to clean and validate. We have found a way to make this process seamless, easy and safe, using a system that is the state-of-the-art solution in single-use facilities.

The EZ BioPac powder transfer system has been designed to reduce operating time with every deployment. This single-use system makes transfer, charging and discharging of biopharmaceutical powders fast and easy. One-person operation reduces manpower requirements, and high levels of containment performance help ensure operator safety. In this white paper, we examine the accumulated savings when the EZ BioPac system is deployed throughout a typical biopharmaceutical process. But first, a short recap:

The most efficient powder containment and transfer equipment, like the EZ BioPac powder transfer system, exhibits a number of specific characteristics, including:
A design developed specifically to handle powders

When combined, these characteristics provide fast and efficient powder handling.

In trials designed to test the filling efficiency of ILC Dover’s EZ BioPac system, the larger size and design of the fill opening and skirt proved to offer filling performance superior to other designs with narrower openings.2

For instance, to measure its specific performance, ILC Dover tested the EZ BioPac system against a typical competitive 2D transfer bag. The test procedure required filling each bag to approximately 5.25 kg, and then adjusting the final weight consistently to an endpoint value of 5.0 kg. The EZ BioPac system yielded a 71.1% faster total fill time, averaged over three independent trials.3

The EZ BioPac is also simple to seal, by either of two methods. The first requires making only a Z-fold in the bag’s upper neck and then clamping the fold tightly closed with attached cable ties. The second uses ILC Dover’s proprietary, robust CrimpLoc™ crimping system, which allows quick, one-person sealing under virtually any conditions.

Competitive bags require placing a cap over the opening, and then holding it in place while putting a split-ring clamp in position over the cap and tightening it in place. The cap can easily slip out of position during this process, requiring repeated attempts to properly align the cap and clamp before the clamp can be tightened to seal the bag.

Some manufacturing processes require large quantities of buffer and media, readily available in a number of locations. Because the filled EZ BioPac 3D containment pack is self-supporting, it can be filled in a central location, and then moved easily and staged in appropriate locations, as required by the process.

GETTING TO MARKET FASTER

Our comparisons were based on just one transfer and filling operation. In a typical biopharm process, all of those steps (and, therefore, the savings) can be multiplied by a factor of 10 or 12, when each deployment in the process is considered.

The design of the EZ BioPac bags also makes it faster and easier to take samples at the product-receiving station. In fact, using EZ BioPac bags instead of drums with standard liners can reduce typical raw material intake time — from receipt at the loading dock to warehouse placement — by as much as 1.5 hours or more. In most plants, this is also a two-person operation, so total savings reaches three man-hours, per product received.

At the same time, the EZ BioPac unit’s design helps reduce both employee safety risk and contamination risk during sampling and transfer.

It’s in the dispensing stage that EZ BioPac powder transfer systems can really separate themselves from the alternatives. Not only does their use reduce the amount of time required to retrieve raw materials and verify quality before release to production, but it can also completely eliminate a two-person, five-hour process step — scooping, weighing and measuring powder into intermediate containers. That’s another 10 man-hours saved, just in that step alone. When all the savings are accounted for, across all dispensing steps, the total reduction is more in the range of 20-plus man-hours.

Finally, during hydration operations, using EZ BioPac bags can eliminate another manufacturing step — namely, scooping, weighing and measuring powder into intermediate containers. Like the step eliminated in the dispensing stage above, this one cuts 5.5 hours off the total time, for each of two individuals — for a total of 11 man-hours. When savings in the other hydration steps are included, the total saved by EZ BioPac rises to 13-plus man-hours.

By adding the savings across all three categories above, we find the total to be in the range of 46 man-hours — more than a full workweek, not including the potential for additional cleaning validation in case something were to go wrong. While every manufacturer would have to apply its own logistics and cost factors to determine its real potential savings, all our testing and field experience indicate the savings is substantial. We would welcome the opportunity to work with you to calculate just how much the use of EZ BioPac powder transfer systems could contribute to your success.