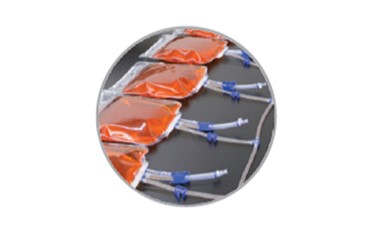 Tubing is arguably one of the earliest components in the pharmaceutical industry to be associated with single-use technology (SUT). Long before broad proliferation of SUT, pharmaceutical companies were using silicone, PVC, and early-generation thermoplastic elastomer (TPE) tubing materials to connect traditional infrastructure. However, while advancements in other single-use systems and components, such as bioreactors, have been heralded, innovation in single-use tubing has been far less pronounced.

We work in an industry that has an immediate impact on the welfare of people. Every component used in biopharmaceutical processing — large or small — is pivotal to the ultimate goal of delivering safe and effective medication. Advancements associated with tubing may not necessarily be perceived as revolutionary, but there is an ability to innovate in this space, which based on the above assertion represents necessary progress.

To deliver cleaner materials and actively mitigate risk in biopharmaceutical manufacturing, evaluation of single-use tubing based on the following development principles should take place.

1. CHARACTERIZATION OF RESIN THROUGH A QUALITY BY DESIGN APPROACH

When the biopharmaceutical industry began using SUT, manufacturers largely utilized existing off-the-shelf materials that were not specifically designed for pharmaceutical processing, such as those being used in food applications. While this was the best approach at the time, today’s manufacturers bear the responsibility of ensuring the materials they use are the best for their intended use and not just what has been passed down based on historical precedent. Having an understanding of how to determine and balance the various constituents of TPE tubing for optimized properties and performance is crucial. This approach is essentially Quality by Design (QbD) at the materials level.

Resin characterization should be performed in the early stages of development, with special attention paid to both the desired physical performance of the tubing, as well as critical quality and supply chain characteristics. However, perhaps most importantly, screening of various resins for extractable compounds should be performed. This can be accomplished using sensitive volatile organic compound (VOC) assays. Further, not only should the virgin resin be investigated, but so should the shifts in extractables’ profiles as a result of gamma irradiation and standard processing (e.g., in the case of tubing extrusion). Through this method, various constituent materials can be identified that may disqualify a resin early in the process.

Other critical criteria that need to be considered in the early phases of TPE tubing development include:

Using a QbD approach for resin characterization drives a material science understanding of the constituent materials before testing of the tubing even begins. It also helps identify and remove certain components that are known to be detrimental to biopharmaceutical processes. For example, those that may be harmful to cell culture growth. By eliminating resins that do not fit specifications, a smaller group of materials then advances to the next stage of development.

In what are colloquially described as traditional facilities, i.e., those based primarily on stainless steel infrastructure, interactions with equipment suppliers are often transactional in nature. The necessary equipment is installed in a facility, and from there, the supplier is typically only involved again if additional equipment is needed or if existing equipment needs service. It is a fundamental paradigm shift when a manufacturer moves from this stainless steel environment to a facility utilizing SUT. While there are well-understood benefits associated with such a transition, it also means the responsibility of ensuring a clean and sterile supply of processing equipment is transferred from facility management to procurement. In essence, what was once a fixed infrastructure is now a critical raw material.

Supply chain integrity is a current initiative not only specific to single-use systems, but also the pharmaceutical industry at large. Ensuring consistency in process materials, both in terms of chemical composition and performance, as well as the stable availability of these materials, is critical. While it would be easier to put the responsibility of vetting the SUT supply chain on the end user, doing so not only reduces suppliers to just systems integrators, but also decreases the overall value of single-use systems.

While supply chain integrity is a broad topic, one aspect of it is material traceability, which is often discussed in terms of supply chain transparency as well. SUT suppliers should be able to provide a high level of material traceability for their products. Most often, industry focus is on the films used in single-use systems; however, tubing also plays an integral role in single-use assemblies and should be treated as such, especially since its supply chain can be more challenging in terms of transparency. The examples below illustrate the increased complexity of tracing the materials for TPE tubing compared to other single-use components.

The first example is porting. With porting, there is a single-use assembly manufacturer ‘N’, and at the next level down, N-1, is the porting manufacturer. If an end user works with a vertically integrated supplier, these are typically one in the same. The N-2 level is the resin supplier, making traceability back to resin a fairly simple exercise. 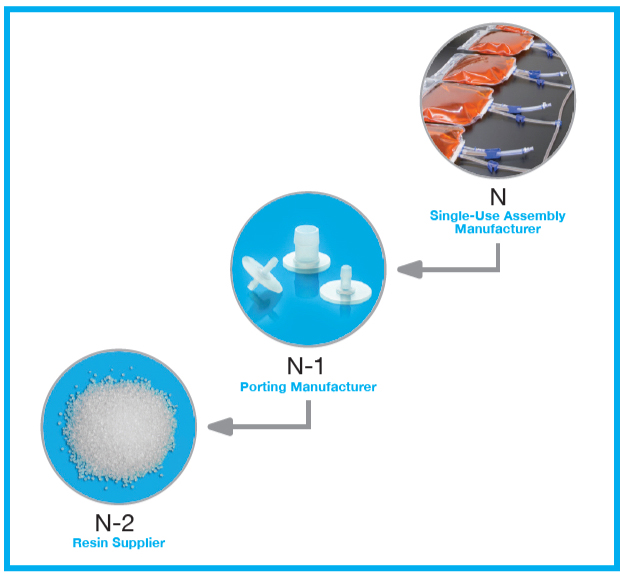 The next example is film, which is the most scrutinized SUT component on the market today. This is for good reason, given the fluid contact area and exposure time it has in process. For film, the single-use assembly manufacturer is again at the first level ’N,’ with the N-1 level being the film manufacturing facility. Because most films utilized for SUT are multilayer, there are typically multiple resin suppliers at the next level, N-2. However, because the unique identities are retained within the film’s multilayer structure, resolving a film to its constituent resins is fairly straightforward even at the ‘N’ level or by the end user. 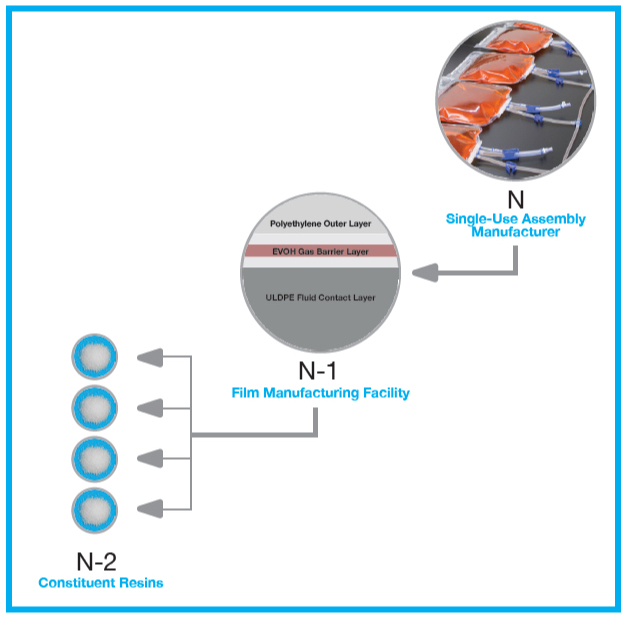 Compare this to the example below for TPE tubing, and the supply chain looks somewhat different. The first level is still the single-use assembly manufacturer ‘N,’ and the N-1 is the tubing manufacturer. However, because TPE tubing is a compounded material, the N-2 is often the compounder, with N-3 being the constituent resin suppliers. As a tubing manufacturer or as a single-use assembly manufacturer, this structure creates far more challenges when trying to resolve the compounded material back to its constituent resins. 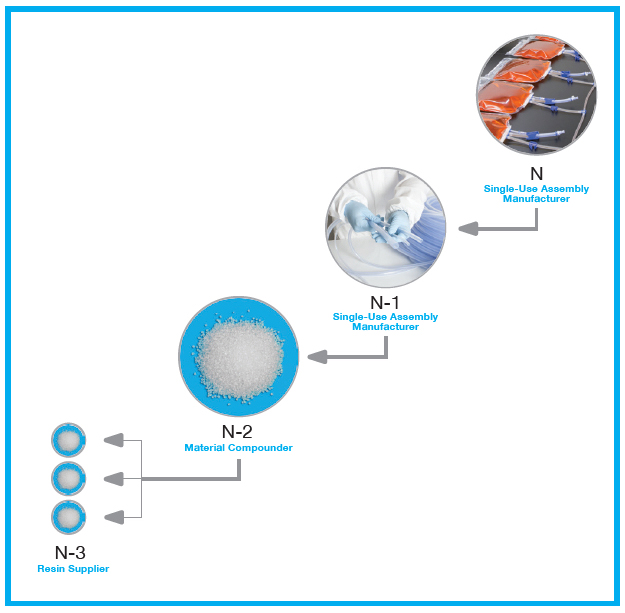 Therefore, while film certainly warrants the level of scrutiny that is applied, tubing is also obviously a critical consideration, and in some ways, more challenging in terms of supply chain transparency. A robust, integrated supply chain translates into better material traceability and, ultimately, increased levels of control in terms of quality, while also ensuring consistent product delivery.

The TPE tubing must perform to a high degree over a variety of applications in order to ensure process compatibility in a wide range of applications. The following performance attributes should be considered during the design of TPE tubing:

Additional guidance can be found in ASTM E3051-16 Standard Guide for Specification, Design, Verification, and Application or Single-Use Systems in Pharmaceutical and Biopharmaceutical Manufacturing. This document is “intended to satisfy international regulatory expectations in ensuring that single-use systems are fit for their intended use and to satisfy requirements for sourcing, supply, design, specification, installation, operation, and performance.” Another reference document to consider is PDA’s Technical Report 66 Application of Single-Use Systems in Pharmaceutical Manufacturing, which provides additional context for many of the concepts discussed in this article.

Although tubing is often overlooked as a simple component, it is a critical one. As such, advancement of biopharmaceutical tubing per the 3 development principles described above can have a profound impact on many facets of single-use assemblies and, ultimately, add a great deal of value to the end user. This was the primary driver for the development of Meissner’s BioFlex® TPE tubing. By optimizing resin selection, focusing on creating a robust and integrated supply chain, and ensuring the tubing performs well across a wide range of applications, a number of benefits were achieved. These include the ability to simplify single-use system designs and potentially reduce fluid contact materials in a given assembly, and the provision of material with a streamlined and strengthened supply chain.