Purification Of Mammalian Virus In A Single Step Viruses can infect mammalian cells and cause diseases such as influenza, hepatitis, yellow fever, smallpox, and AIDS. Since some biotherapeutic products are produced using mammalian cell lines or plasma, the risk of viral contamination in these products is a concern and guidelines have been enforced to alleviate this risk. Chromatographic separation of viral particles from process intermediates is a key part of ensuring viral safety in biotherapeutics (ICH Expert Working Group 1999, Moritz 2005). Additionally, purification of viral particles is used extensively in the study and characterization of these infectious agents. Understanding aspects of a virus, such as how it infects host cells, uses the host cells for reproduction, and evades the host immune system, aids scientists in determining how to use viruses for research and therapy. In order to study a virus, a pure, high-quality infectious population is required. Conventional techniques for mammalian virus purification, for uses such as vaccine production or biological studies, can produce material of variable quality and quantity, often with significant loss of particle infectivity. 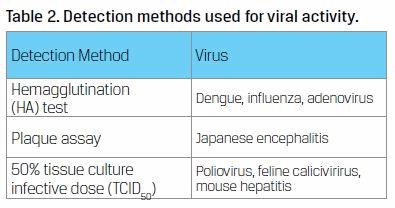 Figure 1A shows the recovery of dengue virus type 2 from cell culture fluid. HA activity was recovered near the end of the gradient, separated from the bulk of A280-absorbing material and from dsDNA (Kurosawa et al. 2012b). Figure 1B demonstrates that decreasing the flow rate by tenfold improves the sharpness of the elution peaks and, hence, separation. In both cases, recovery of HA activity was greater than 95%. Recent studies have indicated that adsorption of dengue virus particles to the surface of CHTTM Ceramic Hydroxyapatite Type II Media is similar to their adsorption to cells (Saito et al. 2013). 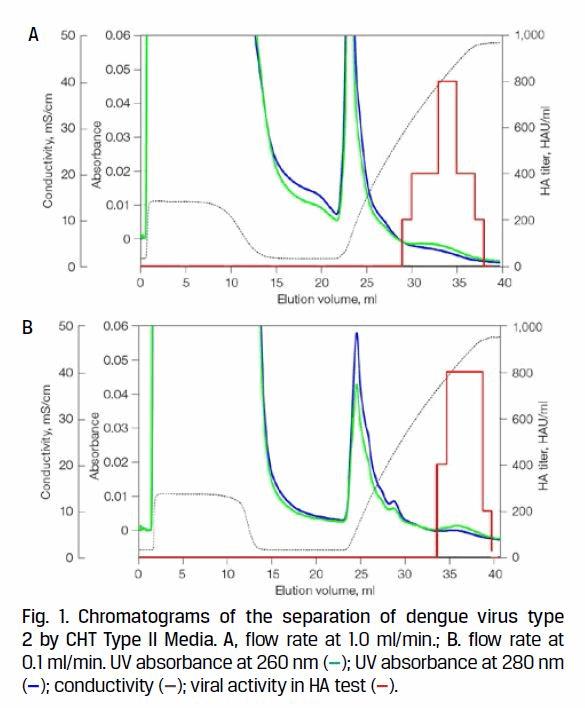 Other serotypes of dengue virus were also bound to and eluted from CHT Type II Media. The approximate elution points in the sodium phosphate gradient for each serotype are shown in Table 3. Types 2 and 4 were eluted at roughly the same sodium phosphate concentration. 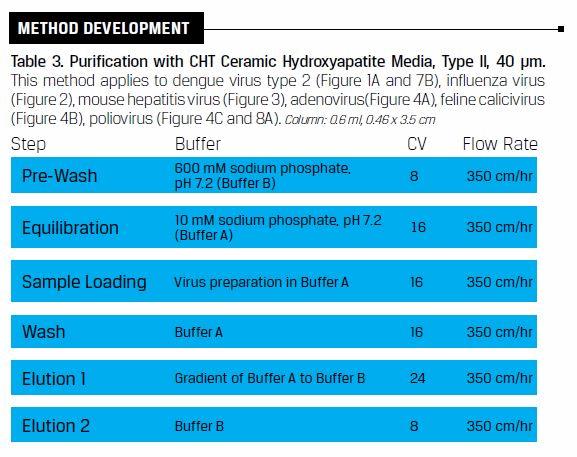 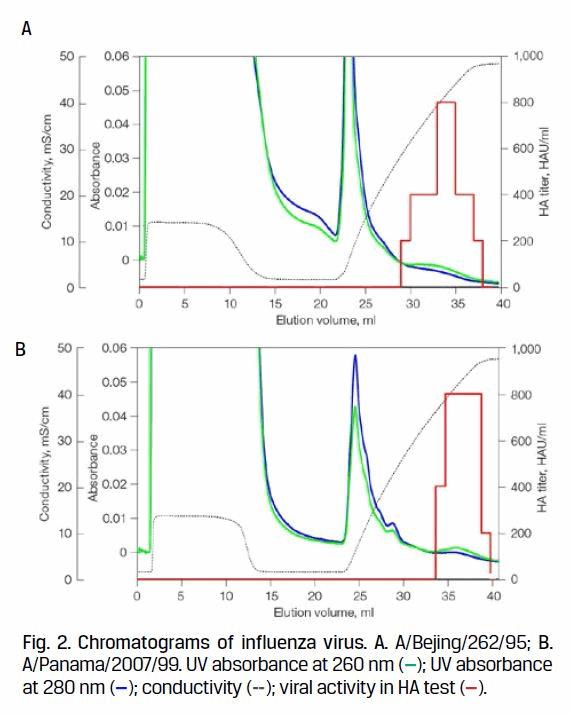 HA activity was separated from a small BSA peak and a significant amount of material that did not bind to the column. Recovery, as measured by the HA assay, was 98% for the A/Beijing/262/95 virus. Higher concentrations of sodium phosphate were required to elute the A/Panama/2007/99 virus. In addition, the retention time was not affected by the source (allantoic fluid vs. cell culture; data not shown).

Mouse hepatitis virus (MHV) is a coronavirus (CoV), a genus that includes SARS-CoV. Two strains of MHV (MHV-NuU and MHV-S) (Hirano et al. 1981) were applied and bound to CHT Type II Media. Both were eluted at 26–28 minutes in the gradient (Figure 3). 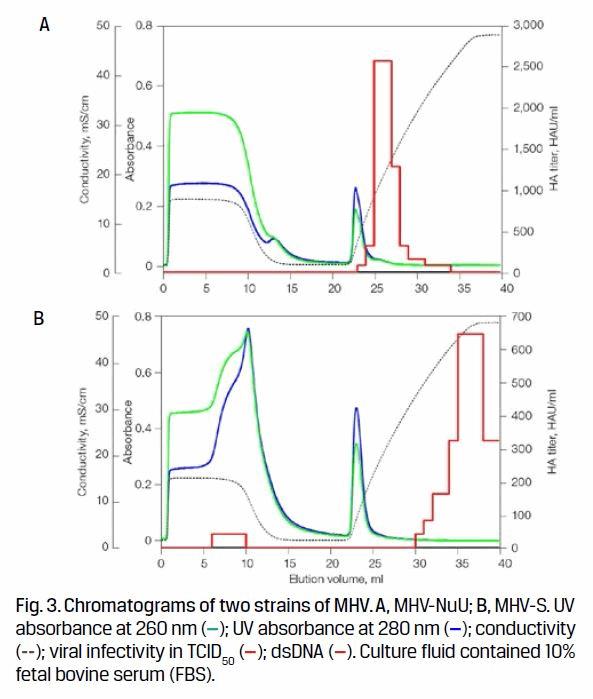 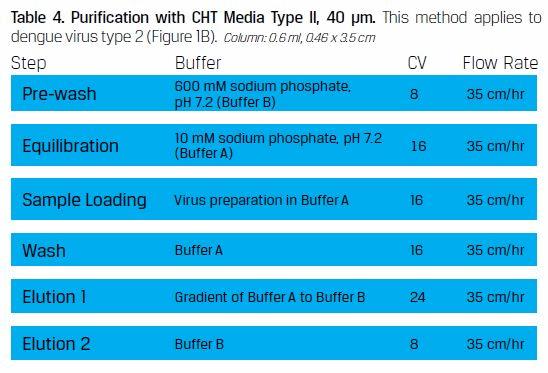 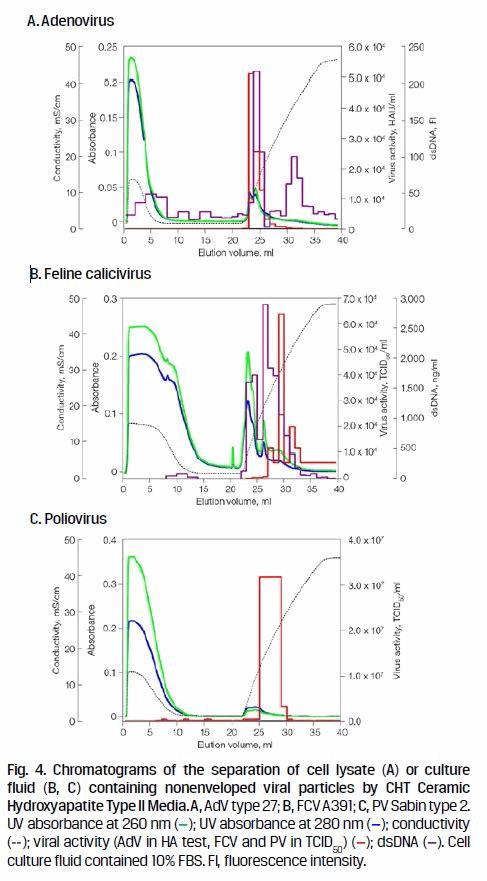 Japanese encephalitis virus (JEV) chromatography  is shown in Figure 5 (Kurosawa et al. 2009, 2012a). Irrespective of the source or strain, the virus was eluted at approximately 350 mM sodium phosphate (note that the gradient used in these two cases was 10–400 mM and the column size is 6.8 x 20 mm). Again, there is good separation between protein contamination and the virus. 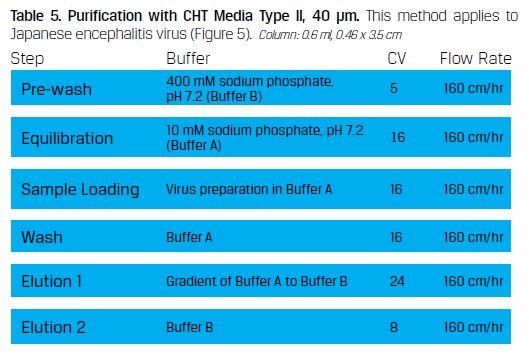 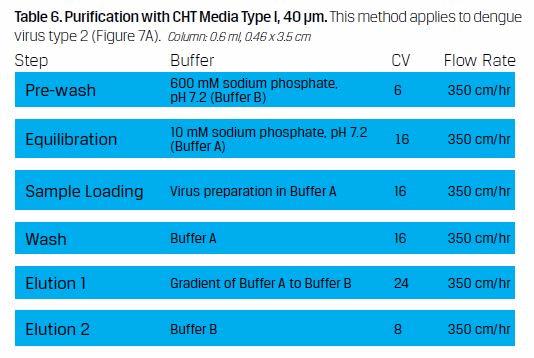 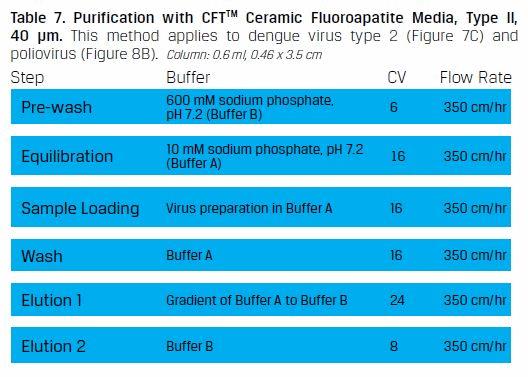 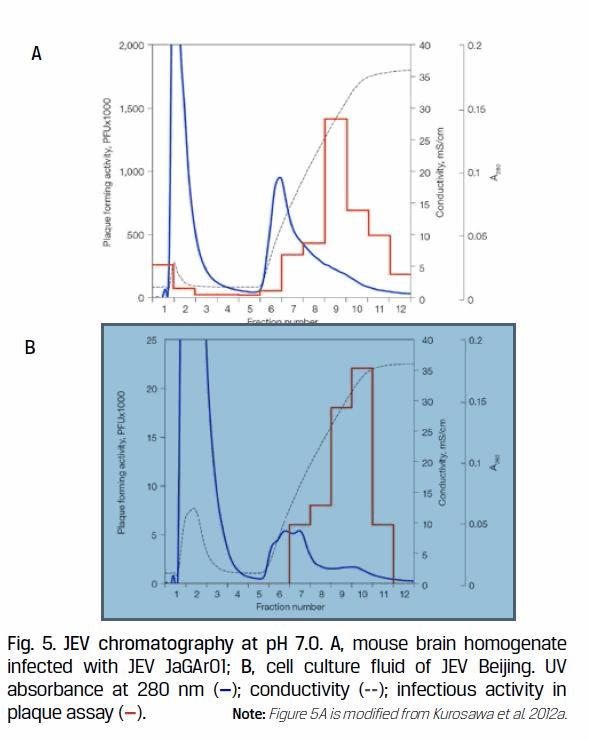 Effect of Hydroxyapatite Type on Separation

Hydroxyapatite, Ca10(PO4)6(OH)2, has been widely used in the chromatographic separation of biomolecules. In its crystal lattice, sets of five calcium doublets (C sites) and pairs of –OH containing phosphate triplets (P sites) are arranged in a repeating geometric pattern. Space-filling models and repeat structure from Raman spectroscopy have also been constructed. Hydroxyapatite has unique separation properties and unparalleled selectivity and resolution. It often separates proteins shown to be homogeneous by electrophoretic and other chromatographic techniques. 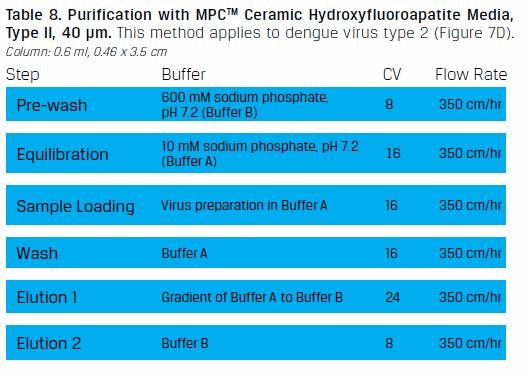 CHT Ceramic Hydroxyapatite is a spherical, macroporous form of hydroxyapatite. It is manufactured by sintering at high temperatures to be converted from a nanocrystalline to ceramic form. Unlike most other chromatography adsorbents, CHT is both the ligand and the support matrix. As shown in Figure 6, hydroxyapatite contains two types of binding sites; positively charged calcium and negatively charged phosphate groups. These sites are distributed throughout the crystal structure of the matrix.

Two types of CHT Ceramic Hydroxyapatite, Type I and Type II, are available for process separations. CHT Type I has a higher protein binding capacity and better capacity for acidic proteins. CHT Type II  has a lower protein binding capacity but has better resolution of nucleic acids and certain proteins. The Type II material also has a very low affinity for albumin and is especially suitable for the purification of many species and classes of immunoglobulins.

MPCTM Ceramic Hydroxyfluoroapatite —  Ca1(PO4)6(OH)1.5(F)0.5 — like CHT, is a macroporous ceramic hydroxyapatite with 25% of the hydroxyl groups substituted with fluoride. The incorporation of fluoride creates a more chemically stable form of the matrix.

CFTTM Ceramic Fluoroapatite — Ca10(PO4)6F2 — is a rigid, spherical macroporous, apatite-based media and is a composite of fluoroapatite and hydroxyapatite prepared by chemically converting hydroxyapatite nanocrystals to fluoroapatite with a fluorine reagent. CFT is a multimodal chromatographic media that interacts with biomolecules through cation exchange via phosphate groups, through metal affinity via calcium atoms, or both.

CFT Ceramic Fluoroapatite possesses separation characteristics similar to  CHT Ceramic Hydroxyapatite.  CFT purifications can be performed at lower pH. In addition, CFT can be used under stringent chromatography conditions to separate acidic proteins. The unique selectivity of CFT Ceramic Fluoroapatite is attributed to its multiple interactions with biomolecules. Amino groups are attracted to phosphate (P) sites but repelled by calcium (C) sites; the situation is reversed for carboxyl groups (Figure 6).

Figure 7 shows the separation of dengue virus type 2 from cell culture contaminants on four apatites: CHT Type I, CHT Type II, CFT Type II, and MPC Media. Yields were 80% or higher for each media type except for MPC, where the yield was 50%. Although binding and elution was achieved on all four media, the separation of virus from impurities was best on CHT Type II Media. 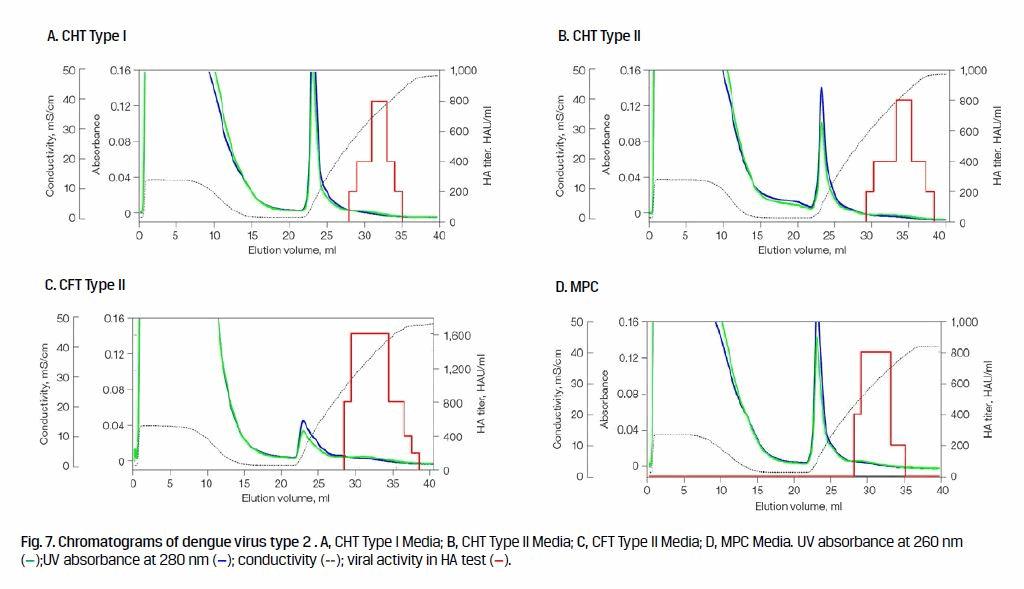 Figure 8 shows a similar study using CHT Type II and CFT Type II Media for the purification of poliovirus, with recoveries of 88% and 102%, respectively. These results illustrate the importance of choosing the appropriate media for the separation in question. 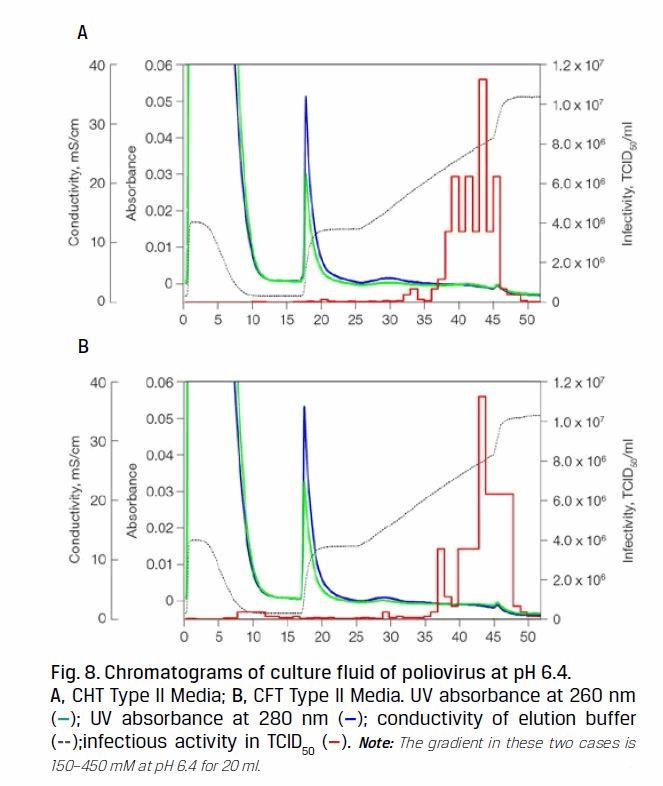 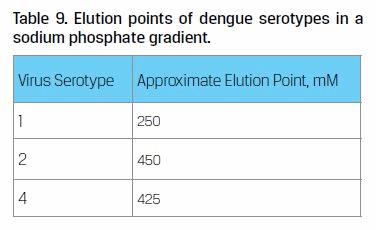 Ceramic hydroxyapatite chromatography provided high purity, recovery, and viral activity for seven mammalian viruses of varying size and different families. We have shown that slowing the flow rate and decreasing the gradient slope may allow better purification of viral particles on CHT Type II Media, signifying the importance of determining the best settings for such factors when using apatite media. Testing different apatites is significant for determining which media type will work best for a specific virus. A larger pore size, as provided by the CHT Type II Media, allowed better separation of the dengue virus from contaminants compared to other apatite media.

Of equal significance, the use of ceramic hydroxyapatite media is simple and provides reproducible results, allowing an alternative to the conventional methods of viral purification.