In mid-2016, shortly after the U.S. Environmental Protection Agency (EPA) revised the health guidelines for perfluorooctanoate (PFOA) and perfluorooctanesulfonate (PFOS) to 70 ng/L (or ppt), the township of Horsham, Pennsylvania, together with Horsham Water and Sewer Authority (Authority), the Township’s public water supplier, set a goal of reducing these two contaminants to non-detect (ND) level in all drinking water supplied. To achieve this aggressive goal, the Authority installed granular activated carbon (GAC) filters on selected wells. A newly developed PFAS-selective ion exchange resin was installed downstream of the GAC filters on one well to evaluate the effectiveness of the resin in further polishing the water to the ND goal. After several months of operation, the GAC filters were bypassed and the resin continued to operate until the concentration of PFAS rose above the detection level. This case study provides details on the performance and consistency of both the GAC and the PFAS-selective resin in meeting the ND goal. A comparison is made of operating costs for both treatment options.

In 2014, monitoring performed in accordance with the EPA’s Third Unregulated Contaminant Monitoring Rule (UCMR3) revealed that 5 of the wells (Horsham Township, 2016) contained concentrations of several perfluoroalkyl substances (collectively called PFAS and pronounced as “p-fas”). Of these, perfluorooctanesulfonate (PFOS) and perfluorooctanoate (PFOA) were found in two wells at concentrations approaching the EPA then Provisional Health Advisories of 200 ng/L and 400 ng/L respectively. These two wells were proactively taken out of service.  Subsequent testing at lower minimum reporting levels than those prescribed by EPA under UCMR3 revealed the presence of PFAS at all 14 of the Authority’s wells.   In June 2016, one month after EPA issued a Lifetime Health Advisory of 70 ng/L (US EPA 2016) for the combined concentrations of PFOS and PFOA, the remaining three of the original five wells where PFAS was detected were removed from service. The Authority began purchasing additional water from an adjacent water supplier and installed granular activated carbon (GAC) filters to remediate and return the five impacted wells to service. Responding to consumer concerns, the Township and Authority jointly adopted an aggressive short-term plan to reduce average PFOS/PFOA concentrations over its entire water system to non-detect levels by the end of 2016. Non-detect levels would be based on then-current laboratory methods and detection limits.  A long-term plan was subsequently adopted, which included installation of PFAS treatment systems on ten wells and one interconnection with an adjacent water system (Horsham Township, 2016).

In November 2016, after receiving a temporary permit from the Pennsylvania Department of Environmental Protection (PA DEP), the township installed a 50 gpm PFAS-selective ion exchange (IX) resin pilot downstream of an existing twin-tank GAC filtration system. The Authority wanted to evaluate the performance of the resin in consistently polishing the water from the GAC system to meet its goal of non-detect levels for PFOS and PFOA.  This was the first permit issued by the state of Pennsylvania for treating PFAS in drinking water using ion exchange resin.

During the test period from November 2016 to August 2018, the total influent PFAS concentration ranged from a minimum of 87 ng/L to a maximum of 147 ng/L, with an average of 108 ng/L. In addition to PFOS and PFOA, five additional PFAS species were present in the influent water, as shown in Table 1. Both carboxylate and sulfonate type compounds (corresponding to acronyms in the Table ending with “A” and “S” respectively) were present.  PFAS are grouped conveniently into two categories of short-chain PFAS (PFBS, PFHxA, PFHpA) and long-chain PFAS (PFHxS, PFOA, PFNA, PFOS) due to similar behavior in the environment (ITRC Fact Sheet Naming Conventions 2018). Short chain PFAS are defined as compounds containing less than 6 carbon atoms for sulfonate and less than 8 for carboxylate type compounds. Average influent values for PFOS and PFOA were 34 and 20 ng/L, somewhat lower than the combined guideline of 70 ng/L set by EPA (but still above the ND goal set by the Authority).

The initial focus of the Authority was to remove PFOS and PFOA to ND, but the Authority also desired maximum removal of all short and long chain PFAS present in the well water. 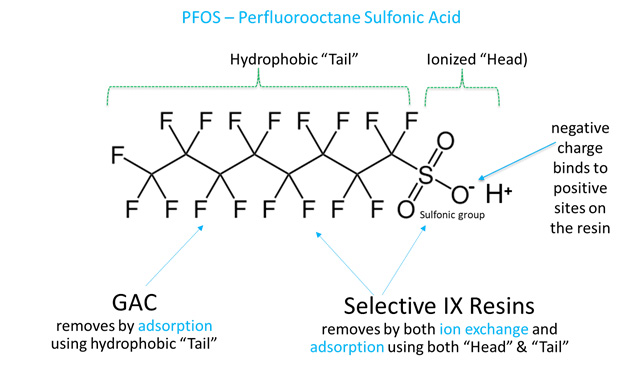 Well #10, with a peak design flowrate of 100 gpm, was used for large-scale piloting at a reduced flowrate of 50 gpm under the terms of the permit from PA DEP. The water was first passed through a 20-micron suspended solids filter, then in series through 2 x 2.5-ft diameter stainless steel vessels, each vessel containing 20 cubic feet of bituminous GAC. Empty bed contact time (EBCT), or the time the water is in contact with the media before it is discharged, amounted to 2.8 minutes for each charge volume of GAC per vessel, or a total of 5.6 minutes for the two GAC vessels; linear velocity was approximately 10 gpm/ft2.  The Authority recognized that the design EBCT was lower than the 10 to 20 minutes specified in the PA DEP Public Water Supply (PWS) Manual. The linear velocity, even though it complied with the PWS design standards, was higher than the typical 4 gpm/ft2 used for GAC. However, the Authority and PA DEP considered the design acceptable considering the relatively low levels of PFAS measured and the temporary nature of the pilot.

The water, after initial treatment by the two GAC vessels, was passed through a 2.5-ft diameter vessel containing 20 cubic feet of Purolite Purofine® PFA694E PFAS-selective resin – see Figure 2. Bed depths for both the GAC and resin media were approximately 34 inches. Sampling points were installed on the outlet of each vessel. An extra sampling point was installed in the resin polishing vessel at 2/3rd of the resin bed depth. This allowed monitoring corresponding to resin EBCT of 1.8 minutes at the 2/3rd sampling point and 2.8 minutes for the entire resin bed. The 2/3rd sampling point would provide advanced notice of PFAS breakthrough and be used to get an earlier estimate of operating capacity for the resin. 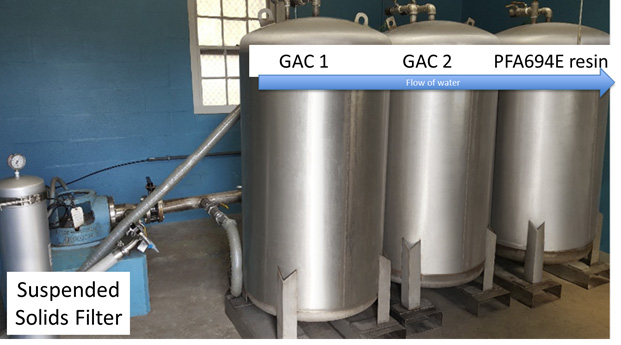 The entire system became operational on November 29, 2016. For reporting purposes, the Authority used a minimum reporting level (MRL) of 2.5 ng/L for each of PFOS and PFOA, based on MRLs provided by the laboratory completing the sample analyses; values below the MRL would be considered non-detect (ND). From start-up, the concentration of PFOS and PFOA sampled at the 2/3rd sampling point of the resin bed remained consistently at non-detect levels until rising to 2.6 ng/L on day 394, then falling back below ND and then rising to 4 ng/L on day 472 – see Figure 3. In comparison, effluent water analyses from the first and second GAC vessels showed that ND was exceeded on day 58 from both vessels, rising to 3 ng/L and 20 ng/L from the first and second GAC vessels, respectively.  This represents an operating capacity of 15,000 bed volumes based on the combined volume of GAC media in the two vessels (this is the same as 15,000 liters of water being treated by 1 liter of GAC). 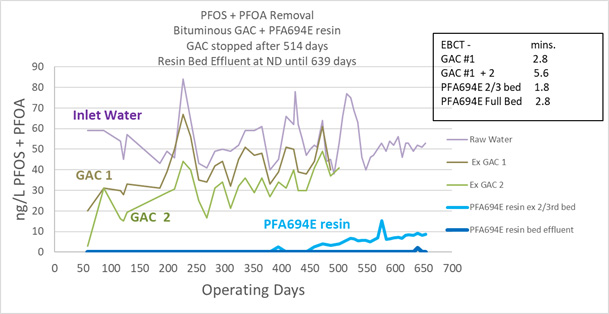 Once the PFOA concentration reached 2.6 ng/L at the 2/3rd sampling point for the resin, the treated water from the resin was diverted to waste while the system continued to operate to allow full evaluation of the treatment system to breakthrough, while maintaining compliance with the PA DEP permit. On day 514, with permission from PA DEP, the two GAC vessels were taken out of service while the raw water was routed directly to the resin vessel which continued to operate.  In this way, the performance of the resin could be evaluated without pretreating with the GAC. The resin operated for 639 days before PFOA was detected at a concentration of 2 ng/L of PFOA in an effluent sample from the resin bed. At that point the concentrations of PFBS, PFHxS, and PFOS were still at non-detect levels. Operating capacity of the resin at that point was equivalent to treating 511,000 bed volumes (BV) of water based on 2/3rd of the resin volume, or 329,000 BV based on the entire volume of resin.

Even though PFOS and PFOA were the initial targets for reduction, non-detect levels were achieved for all PFAS in the outlet water from the resin vessel. For conciseness, only total PFAS breakthrough graphs are shown in Figure 4, but the order of breakthrough observed was PFHxA < PFHpA < PFOA < PFNA < PFBS < PFHxS < PFOS. 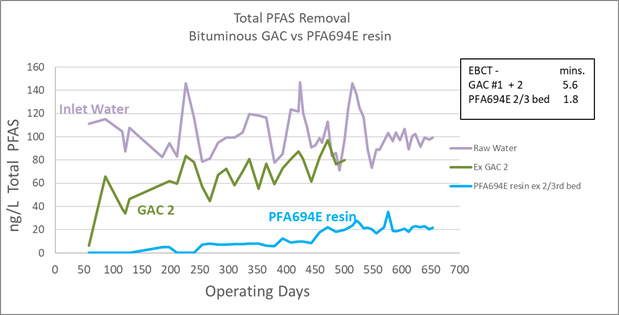 The Authority has since received a modified permit from PA DEP to operate a twin-tank resin-only system. The system was installed in mid-October 2018 and continues to operate today.  This system will be further evaluated as the basis for design and construction of permanent, resin-only treatment systems at this well and two other wells that are part of the Horsham Water and Sewer Authority water supply.

The desire of Horsham to reduce PFOA and PFOS to non-detect levels, instead of merely complying with US EPA’s guideline of 70 ng/L, is a first for the water treatment industry.

Field piloting of Purolite’s Purofine PFA694E PFAS-selective resin demonstrated that the entire suite of PFAS present in the well water (PFBS, PFHxA, PFHpA, PFHxS, PFOA, PFNA and PFOS) were effectively reduced to non-detect levels while operating with very short EBCT of 1.8 minutes and treating 511,000 bed volumes of water (639 operating days).  The very short EBCT required for the resin means that more compact ion exchange vessels can be used compared to GAC for a full-scale treatment system, resulting in much smaller footprint, headspace and capital cost.

Prior to piloting, the relatively low concentrations of PFAS in the inlet water was expected to favor adsorptive media like GAC. However, operating capacity for the PFAS-selective resin was shown to be more than 30 times higher than for GAC, demonstrating the superiority of the ion exchange removal mechanism for consistently reducing ionized PFAS to non-detect levels.

After the GAC system was stopped, the resin continued to perform consistently on its own. Based on this, PA DEP recently permitted the Authority to treat the water with just two PFAS-selective resin vessels in series, eliminating the GAC system and allowing for a system that met the ND goal of the Township and the Authority. 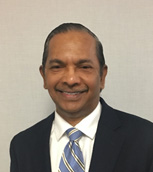 Mr. Francis Boodoo is the Director of Applied Technologies at the Purolite Corporation. He is the holder of a bachelor’s in chemical engineering and a master’s in business administration from Colorado State University. He has over 35 years of expertise in the remediation of potable and groundwater, using ion exchange resin and adsorbent technologies for select removal of contaminants such as perchlorate, nitrate, arsenic, chromium, and uranium. His experience with poly- and perfluoroalkyl substances (PFASs) includes the development, testing, process design and operation of highly selective ion exchange resins for reducing PFASs in water to non-detect levels. Mr. Boodoo is the holder of 4 water treatment related patents and currently provides training and support for the company’s global sales force. He can be reached at francis.boodoo@purolite.com. 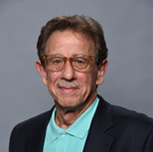 Mr. Ted Begg is Sales Director at Purolite Corporation. Mr. Begg has 40 years’ experience in water and wastewater treatment in the Power, Municipal and Groundwater markets.  As Sales Director for Purolite his responsibilities include east coast sales management, new product and applications development, and pharmaceutical sales and support for Purolite’s Americas division. Mr. Begg has been directly involved in PFAS and other groundwater application development and commercialization. He can be reached at ted.begg@purolite.com 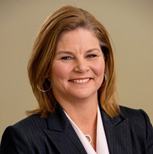 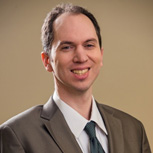 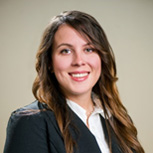