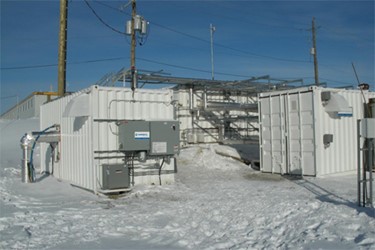 The Detour Lake deposit is Canada’s largest undeveloped pure gold reserve, and is located approximately eight kilometers west of the Ontario-Québec border, 180 kilometers northeast of Cochrane, Ontario. Gold production at the site began in early 2013 and production at the mine is expected to grow over time.

During the planning stages of the project infrastructure, it was determined that Membrane Bioreactor (MBR) technology was the best treatment option for camp wastewater because of the strict environmental requirements for direct discharge into surrounding wetlands. In early 2010, newterra was awarded the contract to supply a fully-packaged, modular wastewater treatment system suitable for a camp of up to 1,500 people. It also had to be scalable to grow from the initial 250-person requirement up to full system capacity. The newterra system for the Detour Lake project was entirely pre-assembled, pre-wired, pre-plumbed and pre-tested prior to shipping – thus significantly reducing costs for engineering and construction. Initially, treatment capacity was 100 m3/day (26,415 GPD). With the growth at the camp, newterra's modular design has allowed the treatment system to be scaled up – most recently with the addition of a fourth treatment unit – increasing capacity to 400 m3/day (105,665 GPD). On-site sludge management has also been incorporated into the system. Sewage treatment began in late 2010, and since startup, the newterra MBR system has demonstrated exceptional performance. Analysis of treated effluent shows that all parameters have been reduced to levels much lower than current and anticipated regulatory requirements.