Manufacturing of sterile aqueous suspensions requires thorough understanding of the factors that influence their physical and chemical stability. Particle morphology of the active pharmaceutical ingredient (API) plays a key factor in drug product dissolution rate, resuspendability, and syringeability. The type and concentration of surfactants used in the formulation impact drug product resuspendability and chemical stability. Additionally, technologies used in API particle size reduction and in high-shear mixing for drug product formulation should be evaluated because of their impact on the API and drug-product quality attributes.

A concise review of these factors is presented in this paper.

A flow diagram of the key steps in the manufacturing of sterile aqueous suspensions is illustrated in Figure 1. Particle size of the aseptically crystallized (un-milled) API is reduced using a fluid-jet mill, or micronizer, to the desired particle size distribution profile. In a fluid-jet mill (Figure 2), size reduction is achieved by particle-to-particle collision. Powder particles are fed into the milling chamber by a Venturi system. The jet gas (nitrogen or air) enters through a set of De-Laval nozzles which increase the acceleration of particles to reach supersonic speed (300-500 m/s). Collision between the particles entering the milling chamber and particles spirally moving inside the chamber results in breaking particles. Due to centrifugal force, finer particles exit through the central part of the chamber while larger particles in the outer ring area continue to accelerate until their size is further reduced by collision [1]. The main parameters that impact particle size are powder feed rate and jet fluid pressure (grinding pressure). Increasing the feed rate increases the concentration of product in the micronizer chamber thus reducing the space of acceleration between particles. In general, higher feed rates result in coarser particles. Higher grinding pressure means higher micronization energy, which produces finer particles.

Micronized API is packaged in Tyvek® pouches and then sterilized using a gas sterilant, e.g., ethylene oxide. Sterilization by gamma irradiation or electron beam can be used only if these technologies have no impact on product quality. For example, generally, irradiation is not feasible for corticosteroids due to radiolytic degradation [2]. Terminally sterilized API is then added aseptically in a Grade A area to the sterile vehicle, and the suspension is mixed using a high-shear mixer to fully disperse and wet the particles.

The final step in the manufacturing process is filling. Pre-sterilized vials are each filled with a fixed volume of suspension using a fully automated system, then sealed with a stopper and cap. 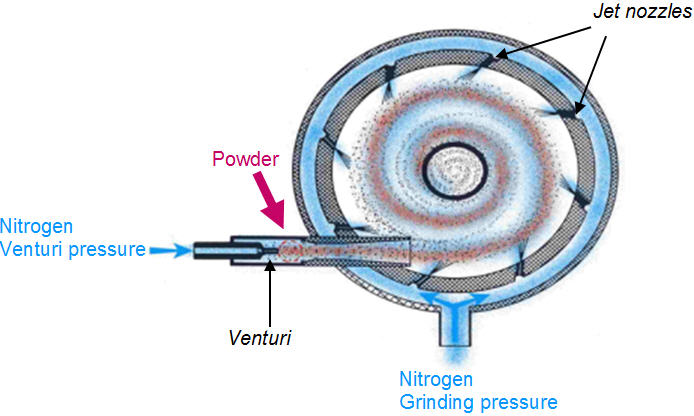 Particle size plays a key role in the stability of suspensions. Large particles have a faster settling rate, according to Stokes law, and could plug the needle during withdrawal of the suspension from the vial or upon injection resulting in improper dosage. Fine particles, on the other hand, form a cake at the bottom of the vial that is hard to disperse if they are not properly bridged during formulation.

The key components of an aqueous-based vehicle are:

Polyethylene glycol 3350 (PEG) is a nonionic water-soluble surfactant which has the chemical formula of HO(CH2CH2O)nH and is commonly used in vehicle formulation to provide steric stabilization of the suspension. Segments of PEG polymer, referred to as “anchoring” chains, adsorb to the surface of API particles to form an adsorption layer. The thickness of this layer depends on several parameters such as polymer concentration, solvency of the media, temperature, and molecular weight of the polymer. The other segments, referred to as stabilizing chains or “tails” extend into the solution [3]. These tails interconnect to bridge between particles, resulting in controlled flocculation. A comparison between the particle size distribution of the API before and after formulation clearly illustrates the bridging phenomenon (Figure 3). Note that suspensions that contain extremely fine particles (nanoparticles) are generally stable and do not require the addition of surfactants. The Brownian motion of the particles counteracts the gravitational force such that the particles remain suspended in the media. As the particles become coarser, they settle and form compact sediment which is difficult to re-disperse if no surfactant is added to the vehicle [4]. If a surfactant is added, however, the powder settles as loosely bridged particles which are easy to re-disperse. 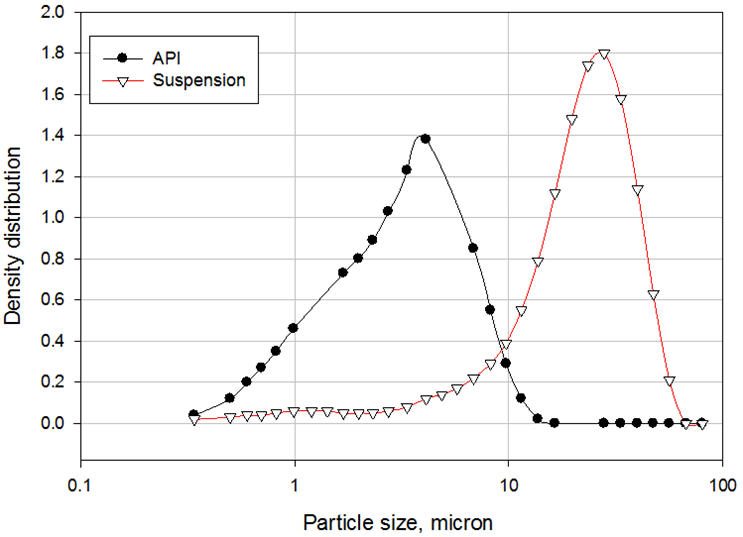 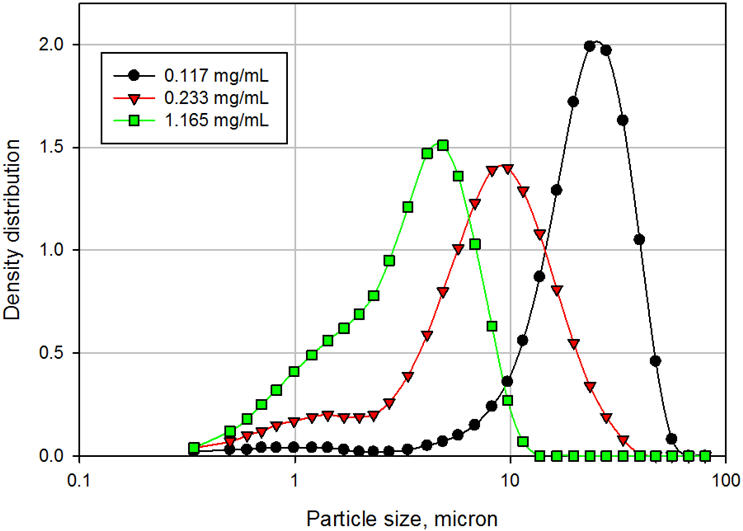 Figure 4: Particle size distribution of suspensions as a function of surfactant concentration

PEG and similar surfactants such as polysorbates, however, are known to be susceptible to autoxidation to form hydroperoxides followed by chain degradation into byproducts such as formic acid. Donbrow et al. [5] showed that aqueous solutions of Polysorbate 20 degrade due to autoxidation, and the degradation is associated with an increase in peroxide number and a drop in pH due to acid formation. The rate of acid formation increased at higher temperatures. In a similar study, Donbrow et al. [6] concluded that formic and acetic acids were formed due to degradation of the hydrophilic polyoxyethylene end of non-ionic surfactants. These acids are formed in the termination step of the free-radical degradation of the oxyethylene moiety. It was also concluded that the rate of acid formation increased at higher incubation temperature.

The following mechanism was suggested:

In the initiation step, free radicals are formed due to light, heat, chemical initiators or catalysts. In the second step, propagation, the carbon-based radical (R.) reacts with oxygen, forming an organic peroxide (ROO.) which reacts with the substrate (RH) to produce an acid and a new carbon radical to repeat the propagation steps. In the termination step, the free radicals are deactivated by bimolecular collisions [5-7].

In addition to pH drop, degradation of the surfactant could result in thickening of the suspension, leading to content uniformity issues. To address pH drop caused by oxidative degradation of PEG, air in the headspace of the vial is replaced with nitrogen, or a buffering agent is added to the formulation.

In order to fully wet and disperse the API in the vehicle, high-shear mixing is required so that the surfactants can effectively adsorb on the surface of each particle. Several types of high-shear mixers can be used. Batch rotor-stator type mixers (e.g., IKA®, Silverson®, Ystral ®) are generally used in lab, pilot and small-volume production vessels. For large-scale equipment, in-line type mixers such Tri-Blender® or Ystral TDS® (transport and dispensing system) are used. In the Tri-Blender design [8], a centrifugal pump is used to pull the powder from a hopper located on the top through a diffuser tube into a mixing chamber where the impeller is located. The vehicle is pumped from the formulation tank and enters tangentially through an outer tube to the mixing chamber. The suspension is then returned to the tank. In the TDS system [9], the powder is introduced vertically by high vacuum generated by a high-speed rotor. The liquid (vehicle) is drawn from the bottom of the formulation tank into the dispensing chamber from the opposite side of the powder entry. In the dispersing chamber, the powder is dispersed in the liquid under very high shear rates and the suspension is recycled to the tank. The following parameters should be evaluated when designing a high-shear solid-liquid mixing system: shear rate (rpm), powder addition rate, viscosity, and liquid feed rate.

A new promising technology that can be used for both high-shear mixing and particle size reduction is the Microfluidizer® Processor. A key advantage of this technology is the elimination of the labor-intensive micronization step. Accordingly, size reduction and formulation can be performed in one step. The central component of this technology is the interaction chamber. The chamber has microchannels with dimensions as small as 50µ through which the fluid flows at velocities up to 500 m/s. The exterior of the chamber is made of stainless steel while the interior is made of either diamond or ceramic. A schematic diagram of the Microfluidizer Processor is shown in Figure 5 [10]. The vehicle and the coarse API particles are added to a feed vessel. The intensifier pump pushes the suspension through the interaction chamber at pressures up to 40,000 psi. The high shear forces, particle-particle collision, and particle-wall collision result in particle size reduction. The suspension is cooled by a heat exchanger and is collected in a receiving vessel or recycled to the feed vessel for more passes depending on the target particle size. This technology can reduce particle size to less than 1µ. 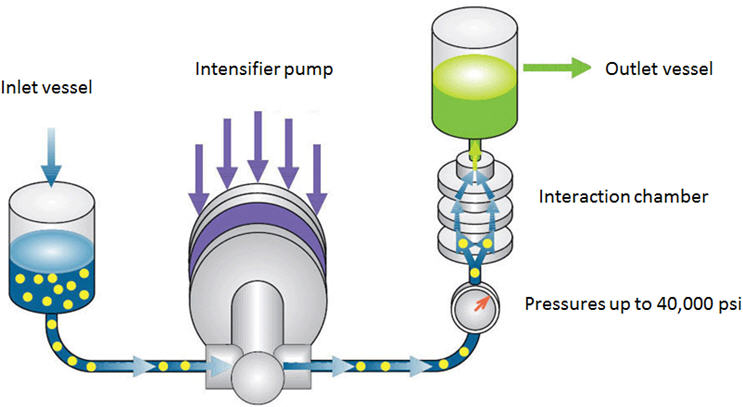 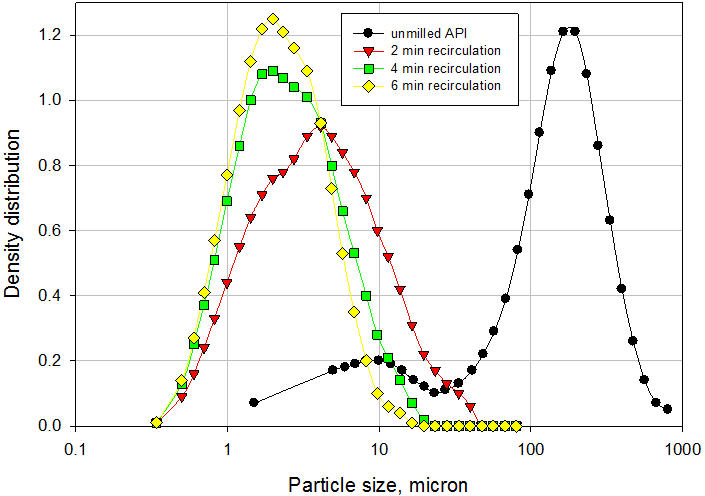 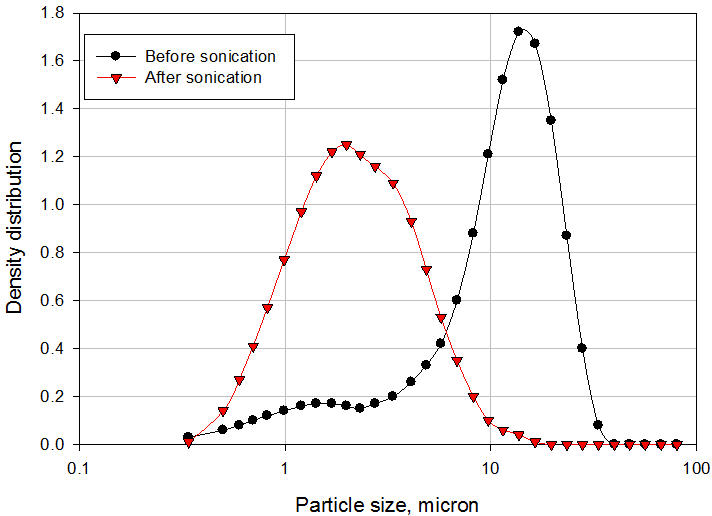 Molecular dynamics (MD) simulation is a method in statistical mechanics involving solution of Newton’s second law of motion under certain constraints for all atoms and molecules in the system under study. MD simulations can be used to predict the adsorption mechanism and kinetics of a surfactant on the surface of API crystals. Using the CHARMM36 force field [11] and the CgenFF server [12] for the parameters and topology files of PEG and the API, MD simulations were performed to investigate the adsorption of 25-mer PEG chains on the surface of a corticosteroid crystal. Snapshots of PEG molecules with all its atoms in red in an aqueous solution at time = 0 and after 6 nanoseconds are illustrated in Figure 8 (top) and (bottom), respectively. Gray beads represent atoms in the corticosteroid molecules in crystal slabs on either side. Water molecules are not shown for clarity. These simulations clearly support the mechanism discussed earlier. One side of the PEG molecule (most likely the hydrophobic) adsorbs on the surface of the crystal while the other side (most likely the hydrophilic) extends in the liquid. 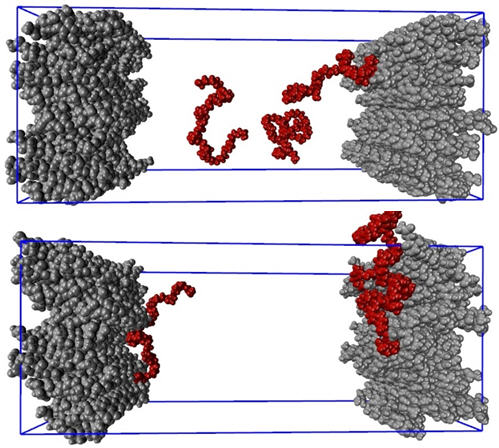 Figure 8: Adsorption of 25-mer PEG chain (red) on API crystal (gray stacks on either side)

The key unit operations in the manufacture of sterile aqueous suspensions are particle size reduction, vehicle formulation, sterilization, and high-shear mixing. All of these operations can impact the properties as well as the stability of suspensions. The drug substance dissolution rate and settling rate are a function of particle size. The type and concentration of surfactants used in the formulation influence the resuspendability of the suspension. High-shear mixing is key for wetting and dispersing of particles during formulation.