Crafting H2O – The Science And Art Of Beer-Making 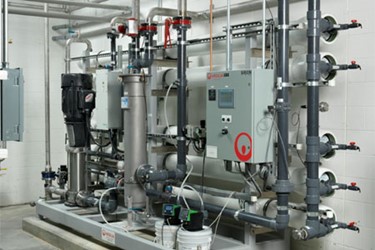 Cincinnati-based MadTree Brewing Company is serious about how they make their beer. Their scientific approach means that they also pay close attention to the water they use, a message they’re more than happy to share.

The influence of geology on water chemistry and how it affects the flavor of beer has long been recognized. The hard water of Burton-upon-Trent in the UK, laden with calcium, magnesium and sulfates, is used to produce IPAs. Bicarbonate-rich water in Munich and Dublin combined with dark-roasted grains yields the dark German dunkel and Irish stouts, respectively. The mineral-free water of the Czech city of Pilsen gave rise to the Pilsners, surprisingly replicated in another source of soft water: Brooklyn.

Yes, although water comprises 95% of beer, little has been done through the years to try to control the quality of this primary ingredient. Now, advanced technologies are transforming the art of beer making into a science.

For the brewers at MadTree Brewing Company, there’s no question of leaving it all up to nature. “Many brewers take what’s provided in terms of the local water source, but we recognize that the quality of the water has a major influence on a beer’s profile,” says MadTree Director of Brewing Operations, Matt Rowe. “Having control over the incoming water is therefore critical to our ability to ensure the consistent quality and taste of our beers.”

Consistency and repeatability in the quality of their beer production is a mantra that underlies MadTree’s vision to be one of the region’s most respected breweries. Launched in 2013 from its base in Cincinnati, Ohio, the company has grown rapidly from a 15-barrel brew house to one on track to produce 30,000 barrels in 2017.

To keep pace with demand for its product, MadTree converted a former manufacturing plant into a new 50,000-square-foot brew house and taproom opened in February, with capacity to eventually produce up to 200,000 barrels a year. Reflecting the company’s focused approach to its craft, the new facility, dubbed “MadTree 2.0,” includes an extensive lab with the latest tools to support quality control and ensure that every beer meets the brewer’s precise expectations. Standardizing the quality of the incoming water was naturally a key priority for the expansion.

“We spent countless hours manipulating and charting each batch of beer brewed to achieve a desired result, then defined the specific steps to be repeated to consistently produce the desired recipe and process,” says Matt Rowe. “Controlling the incoming water for our brewing process is critical to ensuring we maintain consistent quality and taste.”

For this, MadTree turned to Veolia Water Technologies, a company with worldwide experience providing water quality and wastewater solutions to breweries, with more than 150 references in North America and Europe.

Veolia’s solution includes 100-gallon-per-minute Sirion Mega Reverse Osmosis (RO) technology to remove up to 97% of dissolved inorganic and more than 99% of large dissolved organic material, colloids and particles. Prior to the RO, the incoming water is first dechlorinated with sodium bisulfate and softened with an anti-scalant. After passing through the RO, the water undergoes ultraviolet sterilization treatment to remove any residual bacteria before going into a 20,000-gallon permeate storage tank. The water is moving all the time, either being sent to the brewing process, as needed, or recirculated in the tank. Any excess output from the RO is used as water make-up for boilers, increasing the operation’s water and energy efficiency.

The ultra-high purity water produced provides MadTree with the flexibility to create individual water profiles for each beer, using ion sources to add desired quantities of calcium, magnesium, sodium sulfates, chlorides and bicarbonate. “With our most recent IPA, Entropic Theory, for example, we went with a higher chloride ratio to accentuate sweetness and increased the magnesium levels to bring a rounder, fuller flavor,” says Matt Rowe.

Of particular appeal to the MadTree team was the Veolia system’s ability to generate data that can be recorded and tracked to provide historical trending for its systems across the board. With its focus on science and precision, MadTree is using the data to make better and more informed decisions on beer and water.

“MadTree is very scientific about the brewing process and wanted to understand everything about every step of our processes,” says Veolia’s Capital Equipment Manager, Tom Baker.  “As such, they consider the RO to be an integral part of their business.”

Consistent with its methodical approach to beer-making, MadTree is charting a logical, progressive path for regional expansion as its sales and reputation grow, says Matt Rowe. The company also is committed to helping to raise standards in the craft beer industry. One of a small but increasing number of “open source brewing” companies, MadTree readily shares information about its products and processes, posting its recipes online and engaging with home brewers interested in honing their craft.

By seeking to change the paradigm regarding the benefits of a consistent incoming water source, the brewer is helping to ensure that the consumer knows what they’re going to get with each can of beer. Says Tom Baker, “We were a bit surprised at first with MadTree’s willingness to share information with potential competitors, but it’s truly part of their philosophy. They’re ready to share the information because they don’t want bad craft beer out there.”

Maybe it’s something in the water.