The water treatment plants (WTP’s) manager for the city of Midlothian, TX reports significant reduction in chemical costs, gaining new management control for their generation and feed equipment, and ending a pesky maintenance burden, by switching to three-precursor vacuum generator-feed, from batch-generator-pumping, for introducing chlorine dioxide (ClO2) into their 8 MGD plant #2. As a result, he plans to make the same change at their 12 MGD plant #1.

“We were generating our own chlorine dioxide on site,” explained Tim Walker, the WTP’s manager, “and the generator and peristaltic pumping to introduce the chlorine dioxide into our process was through a lease agreement that was part of our purchase of sodium chlorite as a raw material.” 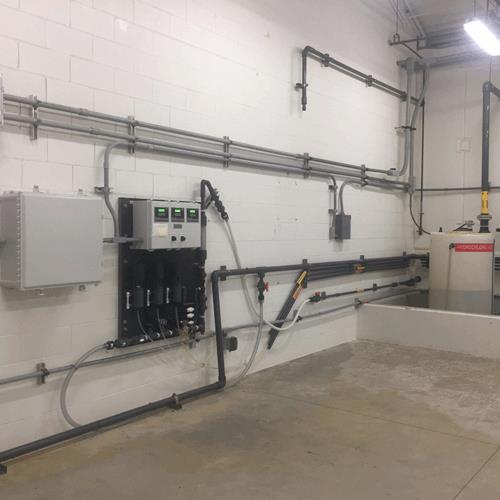 “That agreement said we couldn’t work on the equipment ourselves; only the vendor could. Every couple of months we had to call in their technician to change the hose. But the major issue that emerged was when I saw the annual cost of the agreement was getting too high. I was glad to hear there was an alternative way that would not only cut our chemical costs, but give us our own control over our equipment, and allow us to not have to continuously check for failing hoses and other problems.”

“I’m estimating annual chemical savings of $27,000 for the first year at the #2 plant, and a total of $75,000 annually for both plants, after we make the change also at plant #1. In the first four months of operation, we’ve only had to call the manufacturer once, and that was because one of us had gotten a little carried away with programming. They were right there within hours to fix it, even though it wasn’t really a problem with their equipment.”

The chlorine dioxide is introduced into gravity-fed raw lake water, primarily as pretreatment to oxidize out a geosmin-related taste and odor problem. The pretreated raw water then proceeds to sedimentation basins, where aluminum chlorhydrate (ACH) is introduced as a coagulant, and the output is pumped into membrane racks. Leaving the membranes, it is disinfected with free chlorine in the form of on-site generated bleach before entering the clearwell, where liquid ammonium sulfate (LAS) is added to make chloramines. Caustic is then injected for pH adjustment as a final step before distribution of finished water.

“With the previous system, the taste and odor problem had been solved with a chlorine dioxide dose of 2.8-3.5 mg/L,” Walker continued. “We’d make a batch from the generator, and then pump it in. We need to monitor the feed for a regulated chlorite (ClO2-) test, which calls for staying below an MCL of 1.0 mg/L of chlorite, and also for staying below 0.8 ClO2 residual. So we worked our ClO2 batches accordingly. With the replacement system, our current ClO2 dose is 2.8 mg/L.”

He added that the #2 plant, which went online in 2012, had originally been provided with an ultraviolet (UV) system to help with the geosmin problem. But the UV use had soon been abandoned, in favor of higher ClO2 doses than an original 0.8 mg/L. When the UV was judged to be causing false chlorite readings, that required extra lab equipment and a certified operator to separate false readings from true, while also contributing significantly to an “electric bill that was off the chart,” it was taken out of service.

“I started as plant manager in 2015,” Walker recalled, “and I could see the chemical cost, which included the ClO2 equipment lease, was going up every year and would soon be out of hand, so I started researching alternatives. I heard about JCS from a chemical salesman, who told me he had heard good things about their vacuum feed equipment.”

Unique design of replacement system allows for continuous adjustment of 3 chemicals, based off the actual chlorite feed rate, to ensure accurate feed throughout the operator’s desired range. Internal electronics allow for the feed system to be remotely monitored and controlled through SCADA.

“JCS arranged for a site visit to one of their installations, where I learned it was very user friendly, easy to adjust, and could work on it ourselves if we needed to, and that they would be right there if we needed them. So we arranged for a 30-day trail beginning last September, and purchased it at the end of the trial. We can easily adjust to control the dose it generates, and have never had to call in a technician for that.”

“It feeds what we need, without any back pressure. That gives us an added benefit of cutting down on electricity cost by eliminating another piece of equipment, and also reduces maintenance. The pump we had before didn’t use much electricity, but lacking an alarm, it required regular checking and maintenance. While the need to replace the hose wasn’t a major problem, it was a frequent one.”

“That was significant in a plant where we only have one regular operator, and run remote from the other plant at night. I expect the chemical savings to become more significant as more development proceeds in our area, while our wholesale sales have already increased dramatically, and as a result we increase plant capacity and our use of it.”

“We’ve much appreciated the service and follow up from JCS, including checking in with us on site without being called. They didn’t just sell it to us and leave us hanging. We’re in the process now of installing a similar system for our plant #1.”

The unique design allows for a continuous adjustment of all three of the chemicals, based off the actual chlorite feed rate, to ensure accurate feed throughout the operator’s desired range. Internal electronics allow for the feed system to be remotely monitored and controlled through SCADA.

*Cliff Lebowitz is an independent reporter and editor. His third-party case histories are based on interviews with end users and their engineering firms, and are approved by them for accuracy and completeness. He holds a B.S. in Biology from Rutgers University.